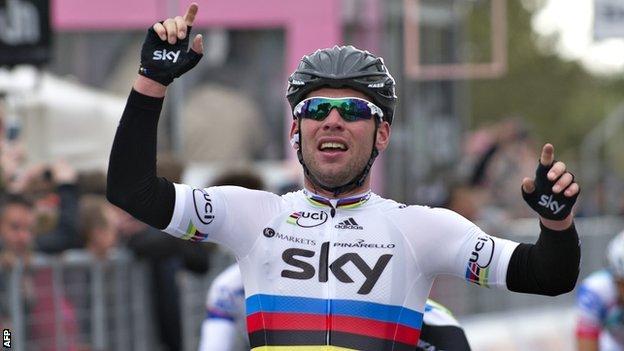 Britain's Mark Cavendish won the second stage of the Giro d'Italia as the Team Sky rider triumphed in a bunch sprint.

My sensations were good - I'm able to kick again

"It's a new team [Sky] for me this year, some of the riders here hadn't worked with me before as a squad, but races like these Grand Tours are the ones I thrive in," Cavendish said.

It was his earliest ever victory in one of the three Grand Tours and, in Olympic year, the world road race champion admitted "that's a great sign".

Sitting next to race leader Phinney, and munching on a large slice of cake the race organisers had given to the American, Cavendish said it had been a long time since he had last sprinted in a race.

"I've lost a lot of weight since then - and I'm putting it back on eating this cake - but my sensations were good, that's OK, I'm able to kick again," he said.

Winning the stage - a 128 mile (206km) loop which started and finished in the Danish town of Herning - gave him his eighth career stage victory in the Giro.

Cavendish was brilliantly led out by Welsh team-mate Geraint Thomas in the closing stages.

"'G' (Thomas) was worried that he didn't feel so good early on, he's done a lot of track work and maybe hasn't got the endurance you get from road racing but he did a perfect job all day," Cavendish added.

The predominantly flat stage, with long stretches up the west Jutland coast, was expected to produce an early break.

Alfredo Balloni (Farnese Vini), Olivier Kaisen (Lotto Belisol) and Miguel Rubiano (Androni Giacattoli-Venezuela) did just that, pulling away with 90 miles (145km) to go, but they were caught with 25 miles (40km) remaining.

There was then an ineffectual attack by Lars Ytting Bak (Lotto Belisol), who went in search of a win on home soil, but he was undone by a combination of a headwind and a watchful peloton determined to set up a sprint finish.

The race stays in Denmark on Monday but leaves Herning for a 118-mile (190km) circuit around Horsens in east Jutland, which is again expected to favour the sprinters, particularly Cavendish.