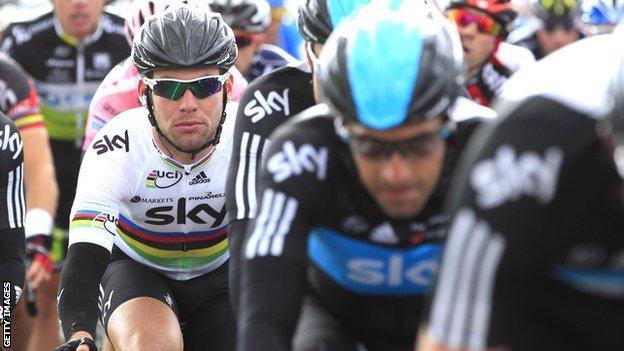 A final bend pile-up helped Ferrari finish ahead of Francesco Chicchi and Tomas Vaitkus in Wednesday's stage from from Assisi to Montecatini.

Cavendish's hopes of victory were ended when he slowed to avoid the crash.

But he now leads the points race by 12 from Australian Matthew Goss. Joaquim Rodriguez retained the overall lead.

The Katusha rider's advantage over Canadian racer Ryder Hesjedal of Garmin-Barracuda remains at 17 seconds, with Astana's Paolo Tiralongo third, a further 15 seconds back.

It was a frustrating end to the race for Cavendish, who was angered by Ferrari after being injured in a crash caused by the Italian on stage three and was unable to get into a winning position following Wednesday's incident.

Team Saxo Bank's Manuele Boaro was at the head of the field for almost 230 kilometres of the stage, having been part of an early six-man break and then pulled clear on his own around 30km from home, but was swallowed up again by the peloton.

Fellow Italians Mirko Selvaggi and Giovanni Visconti briefly led before Team Sky and Saxo Bank made parallel charges to the head of the field.

Ultimately, though, it was Ferrari who charged through to victory.

2. Ryder Hesjedal (Can, Garmin-Barracuda) at 17 secs