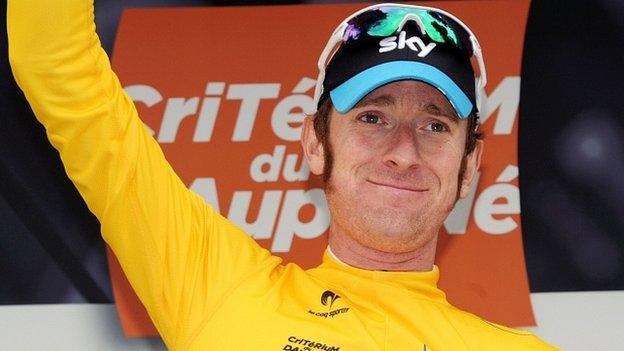 Bradley Wiggins took the overall race lead after the first stage of the Criterium du Dauphine.

Wiggins came second in Sunday's prologue and, although he finished 61st in the opening stage, it was enough to move him into first position.

The Team Sky rider finished four seconds behind Evans, who prevailed in a tight sprint finish.

But defending champion Wiggins, 32, took the yellow jersey and leads Australian Evans by one second going into Tuesday's second stage, which covers 160km from Lamastre to Saint-Felicien in the Ardeche hills.

Asked by reporters if he had found form too early with the Tour de France still four weeks away, Wiggins said: "I can never win whatever I do.

"If I didn't take the jersey or perform here then I'm the biggest piece of rubbish out there but if I win here I've peaked too soon."