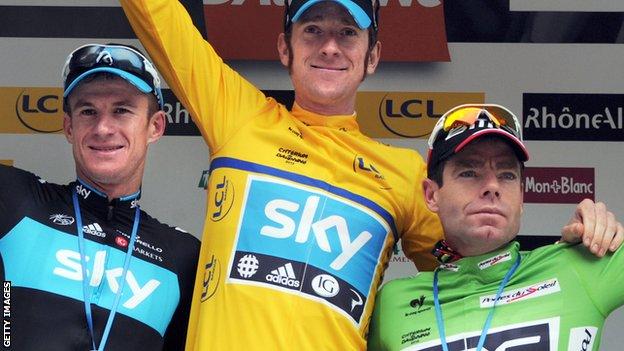 Wiggins, 32, retained his title in the French Alps, finishing one minute and 17 seconds ahead of fellow Team Sky rider Michael Rogers of Australia.

"It's a big win but I wouldn't say I'm the favourite for the Tour de France," said Wiggins.

The Tour de France begins on 30 June and Wiggins will be full of confidence going into the gruelling three-week race.

He is eager to make up for last year's disappointment when a broken collarbone forced him out of the event.

But Wiggins was keen to play down his chances of winning the Tour de France after his third major title of 2012.

As well as the Criterium du Dauphine, Wiggins has won Paris-Nice and the Tour de Romandie.

"Everyone talks a lot about the Tour de France, but winning Paris-Nice and the Criterium du Dauphine in the same year, that's huge," added Wiggins.

"So whatever happens on the Tour, I can already be satisfied.

"This is probably the best shape I've ever been in to win the Tour.

"But it's probably going to be the hardest thing I've done."

Wiggins had held a lead of one minute and 20 seconds over Rogers heading into the seventh and final stage of the Criterium, and never looked like surrendering that advantage as he safely finished in the pack to retain his title.

The stage victory went to Daniel Moreno of the Katusha team, who completed the 124.5km ride from Morzine to Chatel in a time of two hours, 59 minutes and 37 seconds.