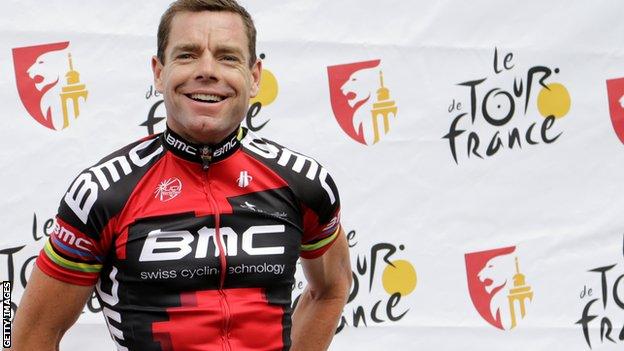 But the 35-year-old Australian insists the event - which starts on Saturday - is not a two-horse race.

"I've never gone head-to-head with Wiggins over a three-week Tour. I'm guessing we'll be in for a good battle," Evans said.

No Briton has ever won the Tour, but 32-year-old Wiggins comes into the race as a leading contender.

"This year Sky and Wiggins their results speak for themselves, certainly in the week-long stage races - they've been the best team and Brad's been the best rider. They've really lifted their level," Evans added.

"We'll see how they perform here at the Tour over three weeks."

Evans and Wiggins are seen as the two stand-out potential winners, particularly in the absence of Spain's 2010 winner Alberto Contador and last year's runner-up Andy Schleck.

Contador is serving a doping ban while Luxembourg's Andy Schleck pulled out with a broken bone in his pelvis.

Evans, though, played down the prospect of it being a two-man duel for the race leader's yellow jersey.

The BMC rider said: "There are 198 people in the race. Eight of them are my team-mates and everyone else I'll have to beat. Wiggins is one of those.

"It's pretty simple - you've got to get to Paris quicker than anyone else.

"This year there will be more attention on us and what we're doing. That will change the way we race a little bit.

Evans has a total of five top-eight finishes, including two runner-up spots, from his seven Tour de France rides.

In contrast, no British rider has ever finished on the podium.

Wiggins, who was born in Ghent, Belgium, but grew up in London, equalled Robert Millar's 1984 best result by a Briton with fourth in 2009.

The opening 6.4km prologue is a small part of the 20-stage race over 23 days, with the time trials - in Liege, stage nine to Besancon and stage 19 to Chartres - expected to play a crucial part in deciding the outcome.

Evans will have the support of George Hincapie, riding in a record 17th successive Tour, and Briton Steve Cummings, who rode in Team Sky's maiden Tour in 2010.

"My motivation isn't waning but it comes from the near misses more than the successes in the last few years," Evans said.

"Two times second, hopefully I can cancel them out with two times first. That would be a good average."