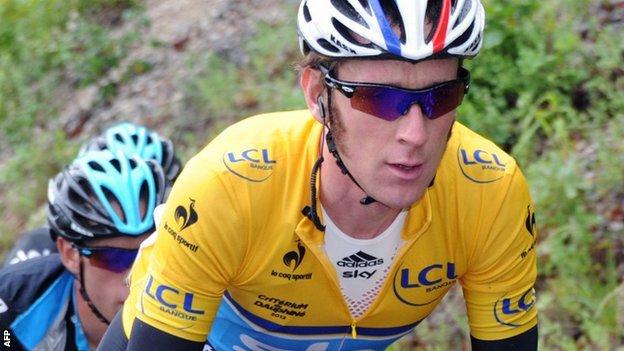 Bradley Wiggins feels in the best form of his life for the Tour de France, starting on Saturday, as he aims to become the first British winner.

Wiggins, 32, said he has not felt such media attention since team-mate Cristian Moreni failed a doping test.

Kids from Kilburn didn't become favourites for the Tour - you were either a postman, a milkman or worked in Ladbrokes

He told BBC Sport: "I don't think I've ever been this good. All the stuff we've been doing this week suggests that I'm in the form of my life.

"I can't wait to get on the ramp and put this into practice."

Discussing the media attention, the three-time Olympic champion added: "It's mad. The last time I was in this position was when we got chucked out the Tour when someone (Moreni) tested positive (in 2007)."

The Londoner is among the favourites to finish in Paris on 22 July with the yellow jersey. Wins in the Paris-Nice, Tour de Romandie and Criterium du Dauphine stage races this year have added to the feeling that Wiggins will be defending champion Cadel Evans's main challenger.

Speaking about whether he senses the public's excitement, Wiggins said: "Just through the magical world of Twitter, you get an idea. It's good.

"In England, it's everyone's dream to play in the Cup final. This is my Wembley. Kids from Kilburn didn't become favourites for the Tour - you were either a postman, a milkman or worked in Ladbrokes."

After struggling to a 24th-placed finish on Team Sky's debut in 2010, Wiggins had lofty aspirations last year, only to crash with a broken collarbone.

"Paris is a long way off," he said. "We saw that last year. I was in hospital after seven days."

Five Britons begin the Tour with Wiggins joined in Team Sky by Chris Froome and world champion Mark Cavendish, whose main aim is the Olympic road race on July 28.

Evans is supported at BMC Racing by Steve Cummings, who won Olympic team pursuit silver with Wiggins in 2004, and David Millar is set to ride for Garmin-Sharp despite recent illness.