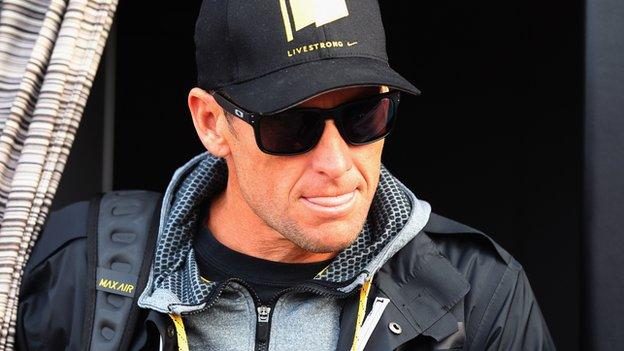 The Tour de France likes history more than a battle re-enactment fan with a lifetime membership of English Heritage.

The race never misses a chance to pay homage to its past, and every town, village or hamlet the peloton passes through has a sepia-toned story to tell of a dashing victory or plucky defeat.

But the Tour loves its champions most of all. They are there in the official literature, the advertisers' brochures, and the newspapers' colour supplements: Jacques Anquetil, Bernard Hinault, Eddy Merckx, and here in Belgium, Lucian Van Impe, the nation's last Tour winner.

There is one very famous champion you do not see so much of though - and that is probably why his current troubles have not made more of an impact on the event he dominated for a decade.

You will spot a few images of Lance Armstrong in the corporate village - and his name is still among the winners, a record-breaking seven times. But the Tour does not appear to love Lance like it loves the others.

There are two big reasons for this. One can be described as an uneasy relationship between Armstrong and the typical cycling fan in continental Europe - at best there was a begrudging respect for the Texan's ruthless brilliance, at worst there was a bitter dislike of a conquering barbarian.

Armstrong tried to charm them sometimes but he also often played up to this "them and us", old-world-versus-new-world dynamic. The tension would be unleashed on his rivals on the road.

And by the end of his 1999-05 pomp, he had given up trying to win over the locals completely. He was playing to a bigger audience now, most of which was back in the United States, where Armstrong was the Tour de France.

There is, however, another very important factor in the Tour's lack of regard for its most successful participant. News that Armstrong has been charged with doping offences by the United States Anti-Doping Agency (USADA) is not news over here.

French newspaper L'Equipe ran a story in 2005 claiming Armstrong used banned substance EPO in 1999, repeating what many continental journalists had been whispering for years.

That, of course, is no basis on which to crucify Armstrong, let alone strip him of his yellow jerseys. He has never failed a formal drugs test and USADA will need more than anecdotal evidence and hunches to take down one of the most celebrated sportsmen of all time.

What we can say is that Armstrong's trials are not the product of some French conspiracy. And neither is the French (or Belgian or Dutch, from what I've seen and heard) public paying much attention to these trials.

The USADA case is a by-product of the US Federal Government's ultimately fruitless investigation of Armstrong. It is an American story, played out in America. And for those wondering why USADA is bothering when the government gave up, it is because the Feds were trying to prove something more complicated, and criminal, than cheating at sport.

Armstrong might not be big news here, but that does not mean the cycling media and typical Tour supporter have stopped caring about doping.

The best attended news conference in Liege this week was the Team Europcar gathering on Thursday to respond to L'Equipe's latest drugs scoop. And the Belgian crowd's booing of Europcar leader Thomas Voeckler in Saturday's prologue made front-page news in both Belgium and France.

Team Europcar's boss Jean-Rene Bernaudeau dismissed that tale as nothing more than the now traditional Thursday-before-a-Tour doping sensation, and others have wondered why cycling seems to save up its bad news for the eve of its most important event.

Scottish rider David Millar, who himself admitted using EPO in 2001 and 2003, is perhaps the most insightful commentator on this issue in the sport.

He is not concerned about the timing of these stories. Although admitting they do not help sell the sport to the unconvinced, he also sees them as part of cycling's "healing process".

"The sport has been hurting itself for 60 years," said Millar, who returned from a drugs ban in 2006 to become an outspoken advocate for change.

"We have turned a corner. We used to be a doping sport and now we are an anti-doping sport. There has been a paradigm shift.

"We cannot sweep the past under the carpet. The minute we do that, we stop being vigilant about the present."

Nature, as we all know, abhors a vacuum, and a vacuum is probably the best description of the Tour's attitude to Armstrong. He is in the books but he is not really here.

Whether the USADA process will resolve this situation is debatable - as is the question of what should happen to any yellow jerseys that might need reallocating.

But Millar is right, cycling must keep asking the questions, and must keep remembering its past. Even the murky bits.