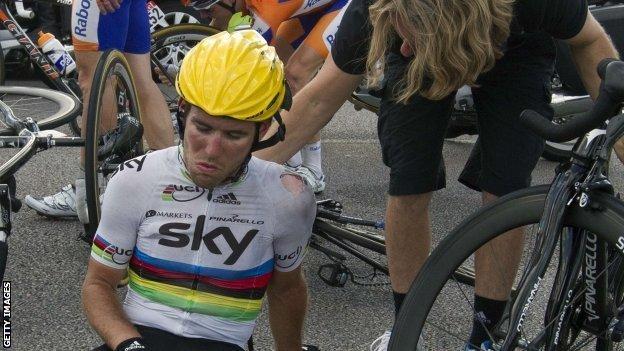 Mark Cavendish was denied the chance of a second stage win in this year's Tour de France when he fell in a crash 2.6km from the end of the fourth stage.

The 214.5km race from Abbeville to Rouen was won by Germany's Lotto rider Andre Greipel in a sprint finish.

Despite being shaken by his fall, Britain's Cavendish was able to get back on his bike and finish the stage.

World road race champion Cavendish demonstrated that his sprinting prowess remains undiminished by winning the second stage on Monday despite not having the full support of Team Sky who are focused on helping team-mate Wiggins win the yellow jersey.

Ouch. Crash at 2.5km to finish today. Taken some scuffs to my left side, but I've bounced pretty well again. Congrats to Andre Greipel

The Manxman, who came fourth in the stage's intermediate sprint, was well placed inside 3km to launch a bid for his 22nd Tour stage victory, but he fell off his bike after failing to avoid a pile-up.

Cavendish, who is aiming to win gold in the Olympic road race in a few weeks time, looked shaken after hitting the deck but got back on his bike to finish the stage and remain in the race.

Bernhard Eisel, who is supporting Cavendish, also fell in the crash, but managed to cross the line around four minutes after the winner.

Team Sky team principal Dave Brailsford said he expects them both to start the 196.5km fifth stage from Rouen to Saint-Quentin.

"Sprinters crash, that's part and parcel of the job," said Brailsford. "When you hit the ground that fast it always shakes you up.

Cavendish is down. And that is what happens when you take a man that is so harshly marked to the tour without protection. I am not attacking anyone. Sky is an incredible team, one I support fiercely but this is my family and risks need to be addressed

"The adrenaline's still running through the system so we'll see how they are later.

"Bernie got quite a big gash above his eye, which was quite nasty. He's having stitches - that will be sore. Mark's more superficial."

Greipel, a former team-mate of Cavendish, had no such problems as the German was led out perfectly by his Lotto team, who had done much of the work in the peloton, to out-sprint Italian Alessandro Petacchi.

It was the German's first win of the Tour and second of his career, following his victory in the 10th stage last year, and his 14th win of the year.

"It was a really emotional victory for me, we worked hard for this and I think we deserved this," said Greipel. "I didn't see the crash, it's not nice to see those pictures, but it's a part of racing and there was still a lot of quality guys there, so it's no problem for me.

"I've just won a stage in the Tour de France, so it couldn't be better."

"Cavendish will live to fight another day, but it remains to be seen what injuries he has. We know he's a tough character and there's no doubt he will carry on if he can. We have to pray he hasn't hurt himself. He's got the Olympics in a few weeks so it's nervous moments for the Team Sky rider."

Tom Veelers of the Netherlands took third with Slovakian Peter Sagan, who won the first and third stages, in fifth to retain the green points jersey.

Sagan leads the sprint classification on 147 points, 61 clear of Cavendish in fourth.

Cancellara, who has led the general classification since winning the opening prologue, retains the yellow jersey after narrowly avoiding the pile-up and safely crossing the line.

Japanese Yukiya Arashiro of Europcar and French pair David Moncoutie and Anthon Delaplace launched an audacious break within minutes of the start and held a lead of nearly nine minutes at one point.

But the trio were reeled in within a few kilometres of the finish, and though a handful of riders - including Samuel Dumoulin, Sylvain Chavanel and Wouter Poels - broke out of the pack in a breakaway of their own, the peloton soon swallowed them up to set up a bunch sprint finish.