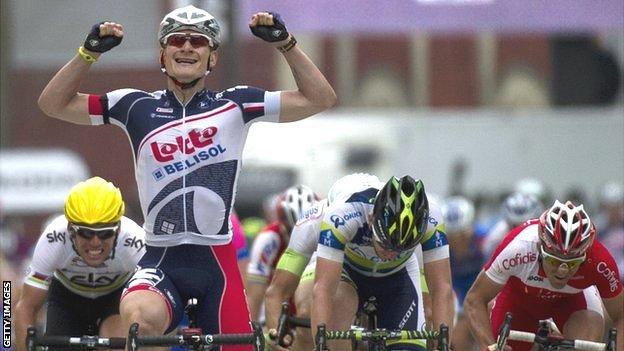 Mark Cavendish was well beaten by Andre Greipel in a sprint finish in the fifth stage of the Tour de France.

The Team Sky rider, who was involved in a crash on Wednesday, trailed home in fifth as Lotto's Greipel powered to his second stage victory in a row.

Australian Matt Goss and Argentine Juan Jose Haedo finished second and third at the end of the 196.5km (122.1-mile) stage from Rouen to Saint-Quentin

Following Wednesday's crash that left Cavendish with a sore hand and team-mate Bernie Eisel with five stitches in a gash above his right eye, Team Sky were intent on keeping their riders out of trouble on the run-in to Saint-Quentin.

"As a unit we wanted to be a bit more present," said team leader Wiggins who is favourite to win the race alongside defending champion Cadel Evans.

Cavendish would have been just about a certainty for the win on that stage in any of the last three years. However, although the team were there, riding at the front of the peloton in the closing kilometres, you have to remember that Cavendish was involved in a crash on Wednesday and Sky are also trying to keep Wiggins on his bike and in contention.

"It wasn't necessarily about placing Cavendish, but also myself. I've been a bit caught up in all the mess the last few days and thinking of what happened last year [Wiggins abandoned the race after breaking his collarbone].

"You just can't take any chances. Everyone realises where the safest place to ride is.

"It was just a conscious effort. We've got the legs, we've got one of the best teams here so if we could just use that a bit more and, as [Team Sky principal] Dave B [Brailsford] said this morning 'let's just stop dithering'."

All eight of Team Sky's remaining riders rode in a train on the left-hand side of the peloton during the closing kilometres and it looked as though their plan had worked when Garmin's sprinter Tyler Farrar brought several riders down in the middle of the main bunch with around 3km remaining.

None of the Sky riders were affected but the leader of the green points jersey category, Peter Sagan, was among those taken out.

Mark probably started a bit too far back on the final sprint but, given that he crashed on Wednesday, credit to him that he even wanted to go

While the main bunch regrouped, Jan Ghyselinck, who had been part of a four-man breakaway from early on in the stage, attacked his fellow escapees and was within sight of the finishing line when Greipel, Goss and Cavendish surged past him.

However, Cavendish, who had picked up 11 points in the race for the green jersey at the intermediate sprint as the first rider from the peloton to cross the line, did not have the legs to make further inroads into Sagan's lead.

"Tried to drop back a bit with 1km to go to get a run-up," said Cavendish on Twitter. "Didn't work, as I left myself too much ground to gain. Congrats Andre Greipel."

The German, who has now won three Tour de France stages in his career, said: "I'm very happy with this second win and I want to say thank you to my team-mates for all their hard work.

"I don't know why everyone believes I can't beat him [Cavendish]. I already beat him last year and I have the best team around me.

"[On Wednesday] he crashed, but [on Thursday] he was there."

The pancake-flat stage went very much to form from the off with France's Matthieu Ladagnous leading a breakaway and being followed down the road by Ghyselinck, Julien Simon and Pablo Urtasun.

The peloton allowed the quartet to build up a lead of more than five minutes before reeling them back in, although the late crash almost saw Ghyselinck stay away for an unusual victory.