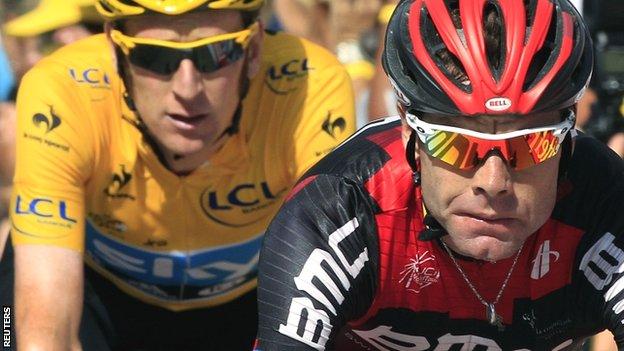 Wiggins repelled late attacks from his main rivals Vincenzo Nibali and Cadel Evans, the 2011 winner, on the descent into Porrentruy to remain in yellow.

The trio finished together, in a bunch 26 seconds behind 22-year-old Pinot.

The youngest rider in the Tour hit the front 2km from the top of the Col de la Croix and held on for the last 16km.

But the real race was happening behind with expert descender Nibali trying to break Wiggins on the ride down from the summit.

The British rider then countered a move by Evans, 3km from the finish, to ensure he did not lose any time, or the yellow jersey.

"It was a lot harder than I expected it to be," Wiggins conceded.

"I was surprised at the size of the group over the last climb but we were there and we were present so it was good day for the team.

"The boys were incredible, they really marshalled the race fantastically and set us up to be able to go with them on the last climb."

The scene for a scintilating day's riding had been set in a frenetic opening 60km from Belfort with several attacks failing to prosper as Team Sky tried to control the pace of the main bunch.

Veteran Jens Voigt was among those trying to form a breakaway group and the 40-year-old German eventually made a solitary break but he was reeled in on the fourth climb of the day, the Cote de Saignelegier.

The madcap riding claimed another casualty as Olympic road race champion Samuel Sanchez briefly lost consciousness after hitting his head in a crash.

The Spanish Euskaltel rider was taken to hospital with a broken collarbone which is likely to prevent him from defending his Olympic title in London on 28 July.

Team Sky will have been very happy with how the day went. It was a very fast stage and, as most people expected, there was a breakaway - the question was always going to be how much Team Sky would let it go. It was no surprise either that Cadel Evans tried to claw a few seconds back on Bradley Wiggins towards the end. Evans said afterwards that this Tour could come down to seconds so, if he sees an opportunity, he is going to try to take it. At one point on the run-in to the finish it did look as if he was going to sneak a few seconds back but it all came back together by the end.

The attacks continued and Jeremy Roy also enjoyed a spell in the lead of the race before Fredrik Kessiakoff reeled him in and made his own bid for victory. However, with the final summit of the day's seven categorised climbs almost in sight, Pinot stole the glory.

It was a tremendous piece of solitary riding by the youngster who was enthusiastically encouraged during the final 10km by his FDJ BigMat team manager Marc Madiot, shouting, gesticulating and banging the side of the car he was riding in.

"I lived through the longest 10km of my life," said Pinot."When I saw the peloton had got to within 50 seconds with 10km to go, I began to panic.

"If I wanted a stage victory, it was now or never."

Kessiakoff's consolation was taking the polka dot King of the Moutains jersey from Britain's Chris Froome, who came home in the same group as team-mate Wiggins to move up to sixth in the overall standings.

Monday's stage nine is the first of two longer individual time trials - 41.5km from Arc-et-Senans to Besancon - in which Wiggins will aim to put more time between himself and his rivals for the yellow jersey.

"It's a fantastic position to be in after the first week and two tough days down," Wiggins added.

"Now we have the time-trial and then a rest day so it's certainly some of the toughest stages ticked off, that's for sure.

"It's not a straightforward time-trial - it's quite technical in places. It'll be a case of going out there and doing what we always do and stick to my race and stay focused on that - if that's good enough, then I'll hopefully take time on those guys."