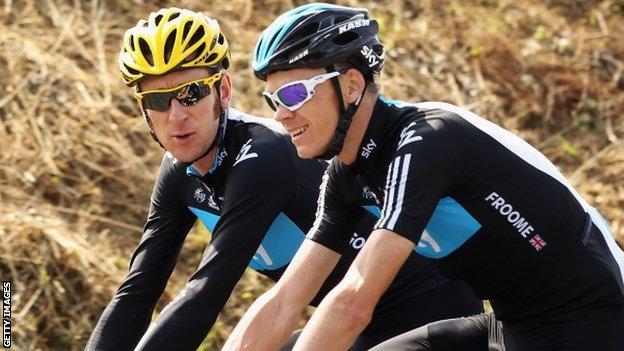 Chris Froome believes he can win the Tour de France in the future but will continue to help team-mate Bradley Wiggins in this year's race.

Froome, 27, is currently third in the overall standings, behind Cadel Evans and yellow jersey holder Wiggins.

He said: "I'd like to win the Tour one day but it doesn't necessarily have to be this year.

"My priority is to make sure the man on top of the podium in Paris is Bradley Wiggins."

Who is Chris Froome?

Froome joined the list of Britons to win a stage at the Tour last weekend, when he broke clear in the last 200m of a fierce climb to win stage seven.

He followed that up with second place in Monday's time-trial which was dominated by Wiggins as he destroyed the field on the 41.5km route from Arc et Senans to Besancon.

Froome also believes he will not have to leave Team Sky to fulfill his ambitions.

"I know my time will come one day and that this team will do for me what they're doing for Bradley now," he said.

"But to be on the podium by his side would be a fantastic satisfaction."

Kenyan-born Froome shot to prominence by coming second at the Vuelta a Espana last year, equalling the highest placed Grand Tour finish for a British rider.

He was then handed a new three-year deal with Team Sky and is expected to help Wiggins climb through the mountain stages which dominate the next week.

Asked whether he would try his own luck should Wiggins have a bad day in the mountains, he said: "No. The plan is to stay with Brad and try to bring him back as much as possible.

"It's not worth me pushing on to maybe get second or third when it's him who's got to win. I'm already two minutes behind him."

Wiggins - who finished fourth at the Tour in 2009 - paid tribute to team-mate Froome during Tuesday's rest day.

"He's an incredible climber, he's got a great engine for time-trialling and he's going to be a big part of this jigsaw in the next couple of weeks."

Australian Evans, winner of last year's Tour, insists he can still overhaul Wiggins in the remaining 11 stages and defend his title.

He said: "I'm sure I can still win the Tour, otherwise I would quit and return home to play with my son."