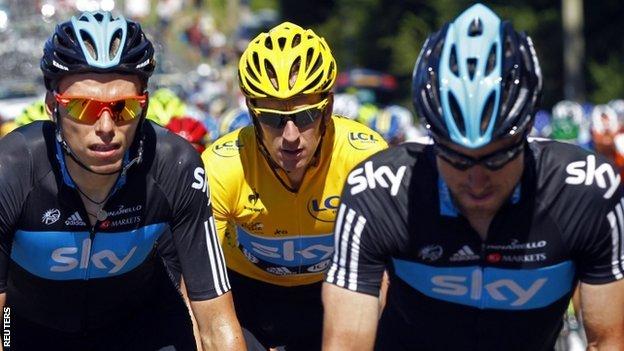 Wiggins will become the first British winner in the Tour's 109-year history when he completes Sunday's stage, a procession into Paris for the leader.

But Sutton said: "Having the yellow jersey is not the end of the journey.

"Now it is about becoming the Barcelona or Manchester United of cycling. We want to try to dominate the sport."

Sutton and general manager Dave Brailsford had already enjoyed spectacular success overseeing the British track cycling team before Team Sky was launched as a professional road racing outfit in January 2010, with the stated aim of producing a British Tour de France winner by 2015.

Wiggins's impending triumph means they have achieved that ambition three years ahead of schedule, with another British rider, Chris Froome, set to finish in second place.

No other British rider has previously finished higher than fourth in the Tour, with Wiggins missing out on the podium by a single place in 2009 and Robert Millar doing the same in 1984.

Team Sky have dominated this year's 3,497km (2,173 miles) race, leading the peloton to chase down breakaways that might have threatened the lead that Wiggins has held since stage seven of the 20-stage Tour, and also protecting him from his rivals in the high mountains.

Between them, Wiggins, Froome and their team-mate Mark Cavendish have picked up five stage wins, with the prospect of world champion Cavendish making it six on the Champs Elysees on Sunday.

* crashed out with broken tibia on stage three

Sutton sees having Froome on the podium too as a "bonus" which demonstrates the strength of the squad but feels he was not the only Team Sky rider who sacrificed personal ambition for the sake of his team.

"It is about having strength in numbers and the quality of the athletes within our squad," Sutton told BBC Sport. "Bradley cannot just go out and win the Tour on his own.

"Ultimately there will be 'races of truth' (time trials) where he can gain time over his rivals but for him to win the Tour is down to his team because he cannot control the Tour on his own - one person cannot do it alone.

"This year there were 170 other riders out there being controlled by Team Sky and that is why it is not just about having another potential Tour winner in 'Froomey'.

"All the other guys on the team are potentially winners in their own right too, but they also did their jobs for the team.

"Look at Edvald Boasson Hagen, Michael Rogers and Richie Porte, who were also alongside Wiggins in the mountains. It was their job to deliver him to the line.

"There is a massive amount of depth in this team.

"And we are not judging our success over a single 12-month period. We intend to be around for a long time."