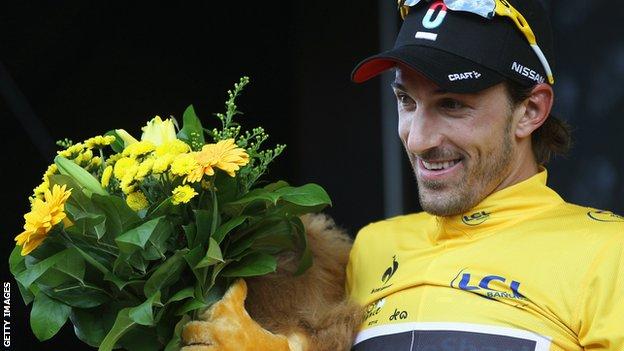 Fabian Cancellara has left the Tour de France to be with his pregnant wife.

The Swiss rider wore the yellow jersey until stage seven of the race after winning the prologue by seven seconds from Britain's Bradley Wiggins.

"The decision to go back home is harder than you might expect. The atmosphere in the group is amazing [which] makes it hard to abandon here," he said.

Cancellara, 31, won the men's road time trial at the Olympics in 2008 and will return to defend his title in London.

"I am not only a bike rider, I am also a husband and father with another baby on the way," added the RadioShack-Nissan rider.

"It is my personal wish to be present when my wife Stefanie gives birth to our second child.

"That 'trophy' is more important than another stage win or an Olympic medal."

The four-time world champion was nearly 39 minutes behind Wiggins ahead of Thursday's 148-kilometre 11th stage from Albertville to La Toussuire.