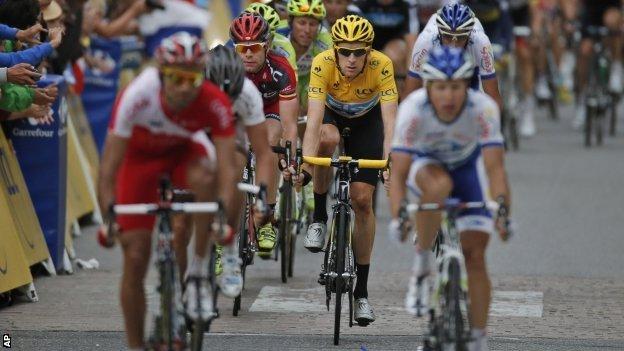 The 14th stage of the Tour de France was hit by saboteurs who threw tacks onto the road and left 30 riders suffering punctures.

Race leader Bradley Wiggins was praised by organisers for "fair play" after halting competitive racing following the incident on the final climb.

Wiggins slowed the pace to allow defending champion Cadel Evans to return to the group.

He said: "I thought it was the honourable thing to do."

Spain's Luis-Leon Sanchez, who was involved in a breakaway, won the stage.

However, the day's drama was unfolding back at the summit of the Mur de Peguere, a Pyreneean mountain which was making its debut as a climb in the Tour.

Race official Jean-Francois Pescheux confirmed: "The nails were mainly thrown on the ground around 200m from the summit.

"I've read about tacks being put on the road in the early part of the 1900s as fans targeted certain riders but I've never come across it in modern times. However, this was not a sabotage of any individual rider. Bradley did the right thing in sitting up and he will have made a lot of friends by doing that. I was surprised there were no attacks from Nibali or Evans earlier on the last climb but that just shows how dominant Wiggins, Froome and Team Sky are."

"It was obviously done on purpose. We have the tacks but we don't know who spread them. They are imbeciles."

However, he was quick to praise the actions of Wiggins. "Sky showed they are for fair play," he added. "They saw that something had happened and they slowed the peloton so that things could come together for the ride to the finish."

Tour etiquette dictates that rivals do not take advantage of another rider's misfortune concerning the mechanics of the bike. And, as soon as he realised what was happening, Team Sky's lead rider called for a truce.

Wiggins, aiming to become the first British rider to win the race, said: "Nobody wants to benefit from someone else's misfortune."

The 32-year-old, who was spending a British record seventh day in the yellow jersey and leads by more than two minutes, conceded though that the riders are powerless to stop such actions.

"It's something we can't control," said Wiggins, who was hit by a flare on Saturday. "There's nothing stopping more of that sort of stuff happening. It's sad. These are the type of things we have to put up with as cyclists.

"I think people take that for granted sometimes, just how close they can get to us. If that happened in a football stadium, or wherever, you'd be arrested, CCTV.

"But we're out there, quite vulnerable at times, very close to the public on climbs. We're just the riders at the end of the day and we're there to be shot at, literally."

Wiggins, Froome, Evans and Vincenzo Nibali, the four riders in contention to win this year's race, all reached the summit together but BMC rider Evans immediately jumped off his bike and removed his damaged back wheel.

However, the Australian's support car was struggling to get up the narrow mountain road which was lined with thousands of spectators and his first team-mate who could offer support, Britain's Steven Cummings, also had a rear wheel puncture.

Evans waited for more than one minute for assistance and then suffered two more punctures on the descent.

George Hincapie, Evans's BMC team-mate, who is riding in a record 17th Tour de France, said: "There was something on the road. I've never seen anything like that."

Any thoughts that Evans would lose significant time in the race though were tempered by the actions of Wiggins, who also had to change his own bike on the descent, although it is unclear whether he too suffered a puncture.

Evans acknowledged the sportsmanship of Wiggins as the peloton crossed the line more than 18 minutes after race winner Sanchez.

Rabobank rider Sanchez escaped from a group of five others, which included green points jersey leader Peter Sagan, with 11km of the 191km race from Limoux to Foix remaining and he held his form to complete the fourth Tour de France stage win of his career.

Monday's stage 15 is a largely flat 159km ride from Samatan to Pau.