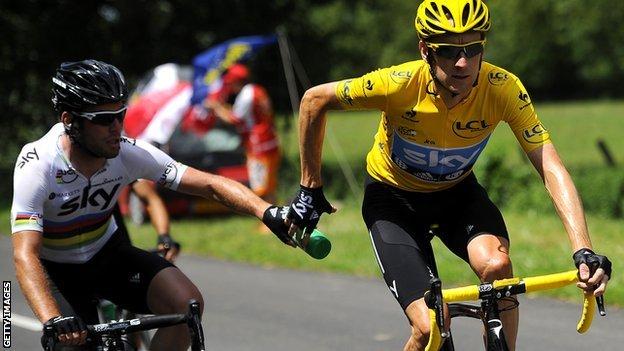 Wiggins leads the rest of the field by over two minutes ahead of another Team Sky racer, Chris Froome.

The 32-year-old has held the yellow jersey since the seventh stage and he praised the selfless work of team-mate Cavendish in keeping him at the front.

"He's been so committed to my cause," Wiggins said. "He's a great friend."

Last year he won the green jersey as the Tour's top sprinter but despite winning Stage Two is fourth in the points race with no chance of catching leader Peter Sagan.

Wiggins highlighted his friend's efforts in aiding Team Sky with their quest for the end-of-Tour title.

"Mark has been fantastic these last two-and-a-half weeks," he said.

"Bradley Wiggins is poised to win this, but it's such a dramatic event. Things do happen. People do have an off-day at a very inopportune moment. I'm struggling to say this, and I don't want to say it, but I don't think I can avoid it: I do think Bradley Wiggins is going to win this Tour de France"

Wiggins and Cavendish will reunite to compete for Team GB at the London Olympics.

Cavendish competed in the madison at the 2008 Games in Beijing but was the only member of the British track team not to win a medal.

All eyes will be on him on the 20th and final stage, the race into Paris - the Manxman could make history by becoming the first person to claim four successive win on the Champs-Elysees.

"For me, it's the most beautiful boulevard in the world, it's an iconic avenue," he said.

"If you ask any person in the world what's the most famous finish of a bike race, it's a bunch finish on the Champs-Elysees.

"It's a very difficult sprint to win, it's almost as important as a world championship for a sprinter."

Wiggins is determined to aid his friend in his search for glory in the French capital and then London.

"He's also got the Olympic road race which he's been quite open about. That's his main objective this year."

As for Wiggins, he knows that the challenge of the climactic mountain stages could determine whether he holds the lead into the final Tour races.

Tuesday is a rest day before four big mountains in the Pyrenees on Wednesday, followed by a final mountain stage on Thursday.

"We've got a difficult task on our hands to try to keep the yellow jersey," Wiggins admitted.

"I always think if you start looking too far ahead you forget what's in front of you."