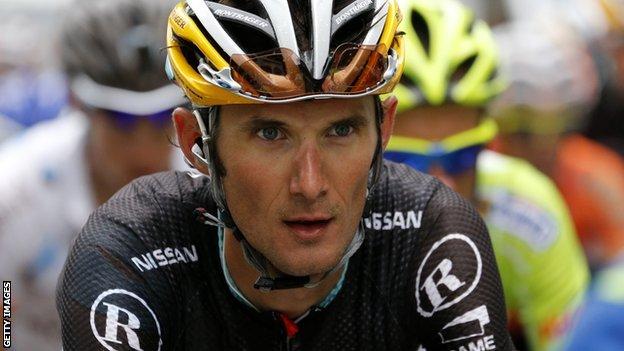 Luxembourg rider Frank Schleck is out of this year's Tour de France after failing a drugs test.

The 32-year-old, who finished third in last year's race, tested positive for the diuretic Xipamide on 14 July.

Schleck, 12th in the Tour's overall standings, "categorically denies" taking any banned substance and insisted that his 'B' sample be tested.

"If this analysis confirms the initial result, I will argue that I have been the victim of poisoning," he said.

Schleck, the older brother of 2010 winner Andy, was nine minutes and 45 seconds behind leader Bradley Wiggins.

His RadioShack-Nissan team said they withdrew him from the race so he could prepare a defence.

2010: Withdraws from the Tour de France with a broken collarbone after falling in the third stage

14 July 2012: Fails a drugs test after testing positive for the diuretic Xipamide

Cycling's world governing body, the Union Cycliste Internationale (UCI), informed Schleck of his failed test earlier on Tuesday and requested his removal from the Tour, even though its anti-doping rules do not require a provisional suspension.

There were uniformed and plain clothes police at the RadioShack-Nissan team hotel, but team spokesman Philippe Maertens denied they had carried out a search of the rooms and were merely there to keep the peace and deal with the media.

Schleck denied wrongdoing and immediately exercised his right to demand analysis of his 'B' sample.

He said in a statement: "I categorically deny taking any banned substance. I have no explanation for the test result and therefore insist that the 'B' sample be tested, which is my right.

"If this analysis confirms the initial result, I will argue that I have been the victim of poisoning."

Xipamide is a sulfonamide used for the treatment of oedema, fluid retention and hypertension.

A RadioShack-Nissan team statement said: "Our team attaches great value to transparency. After being informed by the UCI (International Cycling Union) about the presence of Xipamide in the urine sample of Frank Schleck on 14 July, the team has decided to immediately withdraw Frank Schleck from the Tour de France.

"Even though an abnormal 'A' sample does not require these measures, Mr Schleck and the team believe this is the right thing to do, to ensure the Tour de France can go on in calm and that Frank Schleck can prepare his defence in accordance with the legal timing to do so.

"On the subject of Xipamide the team can declare the following: it is not a product that is present in any of the medicine that the team uses and the reason for the presence of Xipamide in the urine sample of Mr Schleck is unclear to the team.

"Therefore, the team is not able to explain the adverse findings at this point. However, the team is fully determined to collaborate with the anti-doping agencies in order to resolve the matter."

It is the second drug-related incident in this year's Tour. Cofidis suspended French rider Remy di Gregorio on 10 July after learning that he may have tried to use banned substances.

RadioShack-Nissan's team manager is Johan Bruyneel, one of the six men charged by USADA in the Armstrong case. Bruyneel opted to skip the Tour to avoid being a distraction to the race and the team's riders.

Andy Schleck was awarded victory in the 2010 Tour when Alberto Contador was later banned for two years after testing positive for clenbuterol.

Andy Schleck missed this year's Tour after suffering a fractured pelvis in a crash during the Criterium du Dauphine.

The Tour resumes with Stage 16 on Wednesday - 197km from Pau to Bagneres-de-Luchon through the Pyrenees.