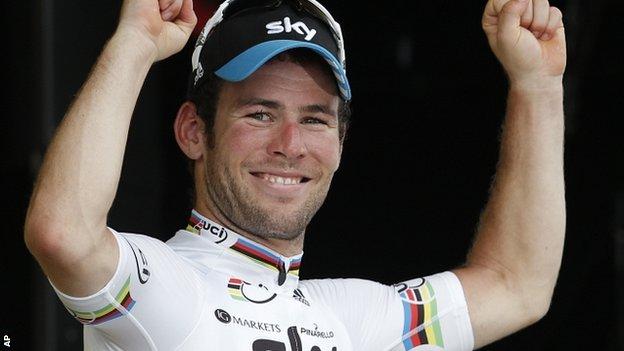 Mark Cavendish admits he has found it hard to sacrifice his individual Tour de France goals despite his pride in helping Bradley Wiggins's victory bid.

The Manxman stormed to his 22nd Tour stage win in five years on Friday, but only his second of this year's race.

"It's like putting Wayne Rooney in defence," he said. "You can still win the match but you can't do your part of that to the best of your ability.

"I'm part of a team but I'm not doing what I can do as an individual rider."

The team's focus has been geared around giving Bradley Wiggins the best chance of becoming the first Briton to win the Tour, a strategy that has worked to perfection so far, with compatriot Chris Froome second in the general classification.

Until Friday, Cavendish had to largely fend for himself in the bunched sprint finishes that are his trademark. He produced a powerful solo effort to win stage two, but missed out on contesting two further sprints when he crashed inside the last 3km on stage four and got caught in a major pile-up 25km from the end of stage six.

In the mountain stages the 27-year-old has been performing the role of a domestique, collecting drinks bottles from the team car for the likes of Wiggins and Froome.

Cavendish had to fend off questions over whether he would need to review his own future, with Team Sky likely to continue challenging for the Tour's yellow jersey in the coming years.

If you look at all those contenders for the Olympics, there are not many left who are in as good a shape as Mark

"I'm currently under contract for three years with Team Sky," he said.

"It's great to be part of the team, what they're doing this year, but it obviously puts me in a difficult situation.

"It hasn't been the easiest thing, obviously. It can make you hungry for sprints especially when you're used to winning five stages here every year."

Cavendish will have another opportunity for glory in Sunday's final stage, usually a processional finish into Paris until the Champs-Elysees, where the sprinters contest the victory.

He is unbeaten on the French capital's famous boulevard, having won in 2009, 2010 and 2011 in the three previous Tours he has completed.

After Paris, Cavendish will attempt to claim Britain's first gold medal of the Olympics a week on Saturday, when Wiggins, Froome, David Millar and Ian Stannard will aim to launch him to success in the road race.

"There were times I was suffering, but I was able to recover very quickly and get over the final climb and sprint with the acceleration I had," Cavendish added.

"It's very important and especially in the fashion I did it and especially as it was a hard stage. It can really give me confidence that I've come out of this Tour de France in good enough condition."

Slovakia's Peter Sagan and German Andre Greipel, who have both won three stages in this year's Tour, plus his own Norwegian Team Sky team-mate Edvald Boasson Hagen, will be among his Olympic rivals.

"If you look at all those contenders for the Olympics, there are not many left who are in as good a shape as Mark," noted Wiggins. "He is certainly the favourite."