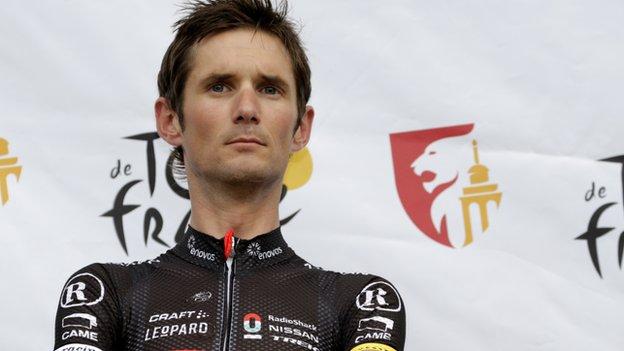 Luxembourg rider Frank Schleck says he is determined to clear his name after his failed drugs test was confirmed by a second analysis.

The 32-year-old was pulled out of the Tour de France by his RadioShack-Nissan team following a positive test for the diuretic Xipamide on 14 July.

Schleck, who was third in last year's race, insists he is innocent.

"The result of the counter test was positive but for me nothing changes - I know I did nothing wrong," he said.

After his 'B' sample returned positive, he added: "I will continue my search to find out how the substance could have entered my body.

2010: Withdraws from Tour with broken collarbone after falling in the third stage

14 July 2012: Fails a drugs test after testing positive for the diuretic Xipamide

"At the moment we are analysing minute by minute what exactly I have been doing, eating, drinking on the days before the control and on the 14th of July itself, who I met, what materials I came in contact with, what nutritional supplements I took."

Schleck indicated on Tuesday he may have been the victim of food poisoning.

In a statement on Friday, he said: "I didn't take anything, I assume it must have been given to me by someone, or it could have happened through an accidental contamination, or it could be caused by something that is not yet known to me since we are still undertaking a number of analyses.

"Since these extra analyses will take a few days, I will communicate again from the moment I have received the results of the extra tests."

Schleck, the older brother of 2010 winner Andy, was nine minutes and 45 seconds behind leader Bradley Wiggins when his team said he was being withdrawn so he could prepare a defence.

He voluntarily attended Pau police station on Tuesday - the last rest day in the Tour - for questioning.

Cycling's world governing body, the Union Cycliste Internationale (UCI), informed Schleck of his failed test earlier on Tuesday and requested his removal from the Tour, even though its anti-doping rules do not require a provisional suspension.

Xipamide is a sulfonamide used for the treatment of oedema, fluid retention and hypertension.

It is the second drug-related incident in this year's Tour. Cofidis suspended French rider Remy di Gregorio on 10 July after learning that he may have tried to use banned substances.

RadioShack-Nissan's team manager is Johan Bruyneel, one of the six men charged by Usada in the Armstrong case. Bruyneel opted to skip the Tour to avoid being a distraction to the race and the team's riders.

Andy Schleck, who was awarded victory in the 2010 Tour when Alberto Contador was later banned for two years after testing positive for clenbuterol, missed this year's event after suffering a fractured pelvis in a crash during the Criterium du Dauphine.