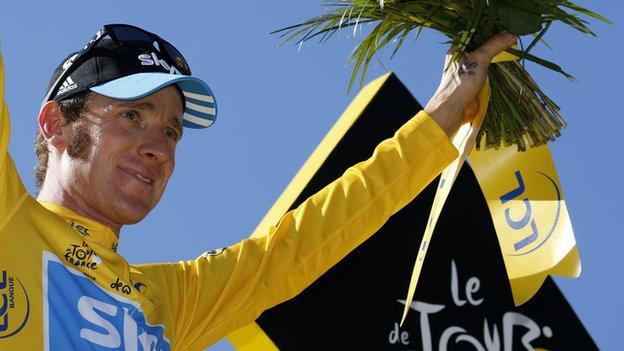 Bradley Wiggins became the first British rider to win the Tour de France on Sunday as a dramatic three weeks came to a perfect conclusion for Team Sky.

The 32-year-old finished in the chasing peloton in Sunday's final stage around the streets of Paris with an overall winning margin of three minutes and 21 seconds from team-mate Chris Froome, with Italian Vincenzo Nibali back in third.

It was a feat that saw many pass on their congratulations to the three-time Olympic track champion.

"It feels very good, very satisfying. When you make history, it's got to be a golden age.

"For Bradley to do that today and for the team to achieve its goal gives a real sense of pride and satisfaction in the lads.

"There wasn't any problems at all, and if there was, I couldn't see it."

"Like everyone in the country, I'm absolutely delighted. Bradley Wiggins has scaled one of the great heights of British sporting achievement.

"To win the Tour de France is an immense feat of physical and mental ability and aptitude. I think the whole country wants to say well done.

"It's the perfect backdrop and start to the Olympics. It's going to be an incredible festival of sport over the next few weeks and Bradley and the whole team's great success in the Tour will lift the spirit of the country."

"This guy pedalled a bike for three weeks and achieved greatness. It's probably one of the biggest sporting moments in British history.

"He went out there, we gave him what he needed, and he went and got the job done. His team backed him 100%. They knew they had the winner coming in to it and he delivered. He's the man. He was born to do this."

"It's incredible what we've achieved today - what a team. It was an honour to have the yellow jersey leading me out. Bradley told me he'd go full gas to the last kilometre and then Edvald [Boasson Hagen] led me into the last corner.

"The finish couldn't have been more perfect - no better end to this Tour.

"Four years ago we said we were setting out to win the Tour, but we haven't just done that, we've got second place as well and a handful of stages."

"It's surprised me. This is a goal he's been working at forever. For me it is so satisfying seeing someone who works so hard get to fulfil that goal."

"This is a monumental day for sport in the UK - Great Britain has produced in Bradley Wiggins a rider who has won one of the world's biggest sporting challenges and everyone involved in cycling in this country must be immensely proud of that."

"Bradley Wiggins has done something unbelievable by winning the Tour de France, but I know he will be the first to recognise that he would not have been able to achieve his victory without a terrific team behind him"

"Huge congratulations must go to Bradley Wiggins. His incredible determination, focus and will to win blew away the rest of the field and propelled this legendary Londoner to the summit of his sport.

"I don't think this is something that will happen very often so we should try to absorb it and really appreciate it. It's pretty remarkable."