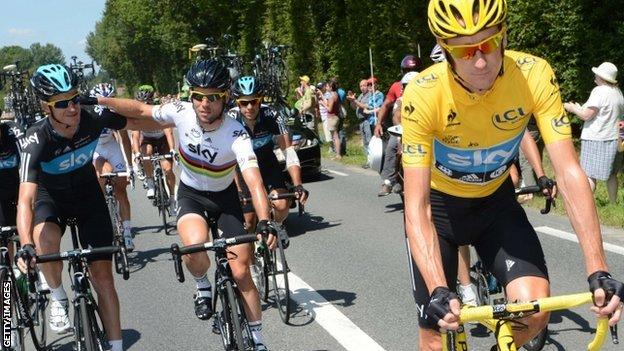 This has been a phenomenal Tour de France for Team Sky and let's hope this is just the beginning.

Obviously Bradley Wiggins, Chris Froome and Mark Cavendish have their eyes on the Olympic road race and individual time trial now but they can go on to continue dominating in the Grand Tours.

However, I have my doubts as to whether Cavendish will still be with the team next year. There are certainly rumours going round that he won't and a lot may start to come out in the weeks after the Olympics.

A third stage win this year, and a fourth in succession on the Champs Elysees, means he has had a phenomenal Tour but I don't think Cavendish will ride like this again, without the full support of his team.

Cavendish has been chomping at the the bit all Tour. He has been doing his chores as a domestique for the team, fetching and carrying the drinks and while he will be pleased they've won, he won't have completely enjoyed it.

It is a big dilemma for Team Sky, although it will be a case of which team has the money to buy him out of the remaining two years of his contract and match the money he is currently earning.

But if he can win the Olympic road race, Sky will definitely have got their money's worth out of him, with him coming into the team as the world road race champion.

Wiggins is capable of winning more Tours de France. He has shown this year he can cope with the toughest of climbs and he will always be in with a shout with a strong team behind him.

Now it is about becoming the Barcelona or Manchester United of cycling. We want to try to dominate the sport

But no matter what the organisers are going to throw at them I think Sky could have a two-pronged attack next year and if the route is a particularly mountainous one then we could see Froome start as favourite.

In terms of hitting the high spots with the British public, no disrespect to Froome, but Wiggins is the better name to be the first Briton to win the Tour.

However, I think Team Sky are professional enough to choose the best man to try and win the Tour and I would expect them to do the same next year.

It will be the 100th edition of the Tour and I don't think Team Sky would definitely put Wiggins in to defend his title if the course doesn't suit him as much as Froome. Team Sky are professional enough to go with the best man.

This year the race organisers opted for longer individual time trial stages and cut out some of the big mountain climbs, going for shorter, steeper climbs in the hope of making the race as fair as possible for all the potential winners.

It hasn't worked but the organisers could not account for how strong Team Sky were going to be or know they would dominate the race in the way they did.

Also, the absence of two good climbers, the suspended Alberto Contador and the injured Andy Schleck, lessened the challenge for Team Sky in the mountains but you cannot take anything away from Wiggins and their achievements.

The organisers could choose to include some of the classic mountain climbs like Alpe d'Huez and Mont Ventoux next year and lessen the time trialling, which could play into Froome's hands.

He is off to do the Vuelta a Espana (one of the three Grand Tours, alongside the Giro d'Italia and Tour de France) after the Olympics in August.

He finished second in that race last year, ahead of Wiggins, but he could have won it and I think Team Sky will have learnt from their mistakes.

He will start as favourite this year and hopefully will get the same level of support from Team Sky as they have given Wiggins in France.

If Froome went on to win that, then who knows what could happen on next year's Tour.