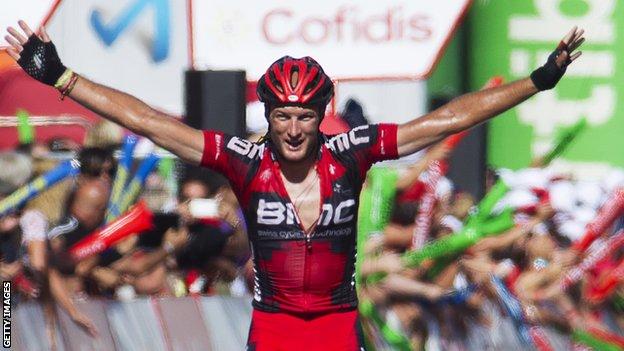 Britain's Steve Cummings secured "the best win of his career" as he took stage 13 of the Vuelta a Espana, while Spaniard Joaquin Rodriguez retained the overall lead.

BMC rider Cummings powered away from the breakaway group with one kilometre left to cross the line unchallenged.

Cummings, 31, has crashed four times this season, breaking his pelvis during the Tour of the Algarve in February and his left wrist while racing in the Vuelta al Pais Vasco in April.

He said: "It's been a long, hard year. I crashed really badly in the Tour de France so I wasn't sure of my condition when I came here.

"But I knew if I got through the first week all right, things could start to get better."

The 31-year-old, who was also involved in an accident during the Tour of California, was the only Briton in the Tour de France not to win a stage.

"When I was a kid I always watched the Giro d'Italia, Tour and Vuelta and dreamed of taking a stage in one of them," he added.

"But opportunities are very limited, particularly if you're working for a team leader. I don't feel I've reached my top condition yet."