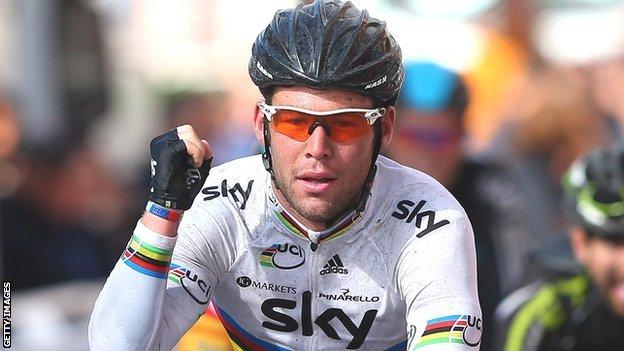 Reigning champion Mark Cavendish will compete in the road race at the World Championships after being selected for the event by Great Britain.

The 27-year-old is part of a nine-man team, which also includes Bradley Wiggins and Chris Froome.

Froome will also compete in the time trial alongside Alex Dowsett, who was chosen ahead of Wales' Geraint Thomas.

The championships run from 16-23 September in the Netherlands, with the elite races live on the BBC.

Olympic silver medallist Lizzie Armitstead is selected as part of the six-strong team for the women's road race.

Wendy Houvenaghel, who recently won the British title, has been chosen for the women's time trial despite criticising her team-mates and describing her non-selection for the Olympic event as "unjust" last month.

and Wiggins on Friday because of a stomach bug.

Earlier this month, the 32-year-old withdrew from the individual time trial for the Championships in Limburg, with British Cycling performance director Dave Brailsford saying: "To expect Brad to hold form is a big ask.

"Once again we find ourselves in a very fortunate position of having a strong pool of riders across the board. Brad has opted out of riding the time-trial at the worlds. This year's focus for him has been fully on the Tour de France and the Olympics."

Thomas, who was one of the men selected on the GB long-list for the time-trial and road race but not chosen to race in either, will compete for Team Sky in the team time trial, alongside the likes of fellow-Brit Dowsett and Norway's Edvald Boasson Hagen.

The team time trial is a new event at this year's World Championships and sees riders competing in the colours of their professional teams, instead of their countries.