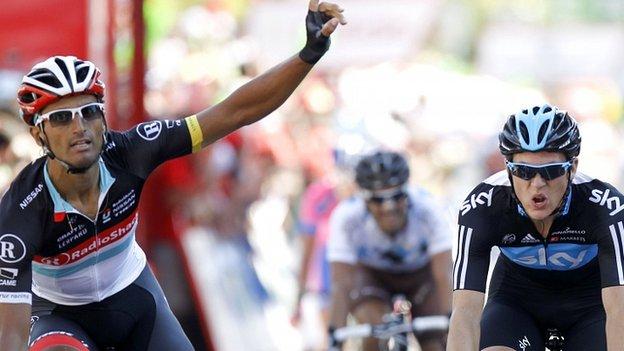 Britain's Ben Swift agonisingly missed out on a stage victory in the Vuelta a Espana as Alberto Contador retained the overall lead after stage 18.

The Team Sky rider was well positioned in a sprint finish into Valladolid after the longest stage of the race.

But Italian Daniele Bennati edged him out on the line by a few centimetres to deny the Briton a notable win.

Contador remains on course for a first major victory since returning from a doping ban, with three stages left.

Another long flat stage beckons on Friday ahead of the final mountain stage on Saturday, before the three-week race concludes in Madrid on Sunday.

Contador leads compatriot Alejandro Valverde by one minute and 52 seconds, with the long-time leader Joaquim Rodriguez 2:28 back in third.