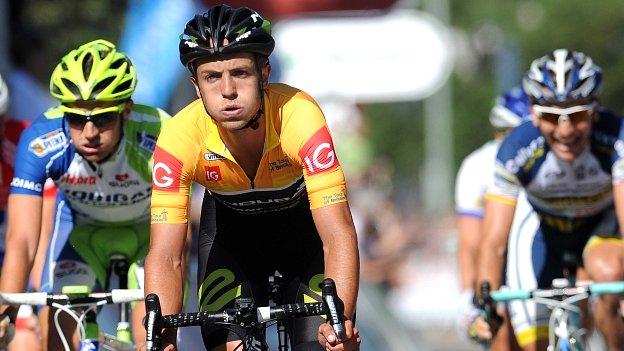 Defending world road race champion Mark Cavendish is relishing the prospect of having Tour of Britain winner Jonathan Tiernan-Locke alongside him.

He will be part of the nine-strong Great Britain team which will compete in Maastricht on 23 September.

"We are really looking forward to having him in the national team. He is an incredible talent," said Cavendish.

Jonathan Tiernan-Locke, speaking to Cycling News in March on the reaction of some of his peers to his re-emergence

After clinching the Tour of the Mediterranean and the Tour de Haut Var in February, he finished second in the two-stage Vuelta a Murcia in March.

Following a spell out of action with a broken collarbone, he won the Tour Alsace in July.

Such results seemed unlikely in 2005 when Tiernan-Locke's early promise seemed set to go unfulfilled after he was diagnosed with Epstein Barr - a virus that led to glandular fever.

Before he became ill, the former mountain bike rider had been selected for Great Britain's Under-23 squad for the 2004 World Championships in Italy.

As his symptoms worsened, he gave up the sport entirely to concentrate on his university career.

After three years out, during which he worked part-time in a bike shop, Tiernan-Locke returned to racing in 2008.

He finished last year's Tour of Britain with the King of the Mountains jersey and fifth-place in the overall standings.

This form secured a move to present team Endura Racing, but there is much speculation about where his future may lie.

Team Sky, home to seven of his eight Great Britain road race team-mates, are reportedly leading the chase among the sport's elite outfits.

"I think he is moving up in the ranks to a pro-Tour team next year and I think he will do quite well there," added Cavendish.