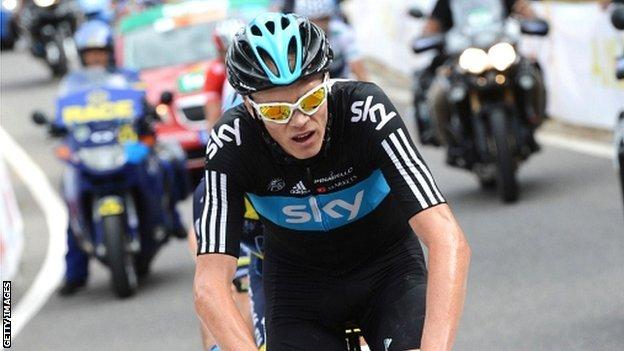 Britain's Chris Froome has withdrawn from Wednesday's time trial at the Road World Championships to focus on Sunday's road race.

Froome, who has competed in the Tour de France, Olympics and Vuelta a Espana, said he needed more time to recover.

In the women's event, Britain's Wendy Houvenaghel is aiming to impress after missing out on Olympic selection.

Froome, 27, finished an impressive second to Bradley Wiggins in the Tour de France in July.

He then won Olympic bronze behind his team-mate in the time trial at London 2012 before finishing fourth in the Vuelta a Espana.

Houvenaghel was not selected for any of the three rides in the women's team pursuit at London 2012 as Joanna Rowsell, Laura Trott and Dani King won gold in a world record time.

However, the 37-year-old bounced back by winning the British Championships road time trial this month and followed that up with a win in the Chrono Champenois event in Betheny to justify her selection for the World Championships.

"I've spent most of the year training for a three-minute team pursuit effort and over the last four weeks I've just applied myself to time trialling," she said ahead of the 24.3km time trial. "I'm keen to get racing on Wednesday.

"The course is very rolling and there are a couple of quite steep climbs.

"I am good at climbing. In any of the time-trials where there have been hills I've done very well. That shouldn't pose too much of a problem for me.

"The course suits my strengths as a rider and I'll give it everything I've got."