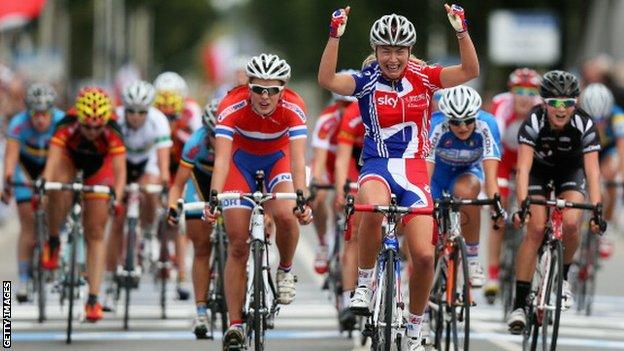 Garner, who turned 18 on Thursday, emulates 2008 Olympic gold medallist Nicole Cooke, the only other woman to retain the junior title.

The teenager finished ahead of Norway's Eline Brustand and Anna Stricker of Italy in a bunch-sprint of 19 riders.

"This win is a team effort more than anything," she said.

2012 Road World Championships on the BBC

Garner was supported by a quartet of British riders in Elinor Barker, Emily Kay, Molly Weaver and Jessie Walker and she was in the leading group throughout the five 16.5km laps, which each featured two climbs - the Bemelerberg and Cauberg hills - as she won in a time of two hours 11 minutes and 26 seconds.

"I was nervous before the race, as always, but the course really suited me," added Garner.

"We trained a lot in these surroundings to get ready for the hills. Especially the Cauberg, which I could take very well.

"This win is a team effort more than anything. The lead out Elinor gave me was fantastic."

GB cycling performance director David Brailsford was impressed by the manner of the victory.

He told BBC Sport: "For a young team to ride in the way they did and to get the lead out and to dominate the sprint is so exciting.

"We've had incredible success through the summer but to watch youngsters break through is in some ways even more exciting."