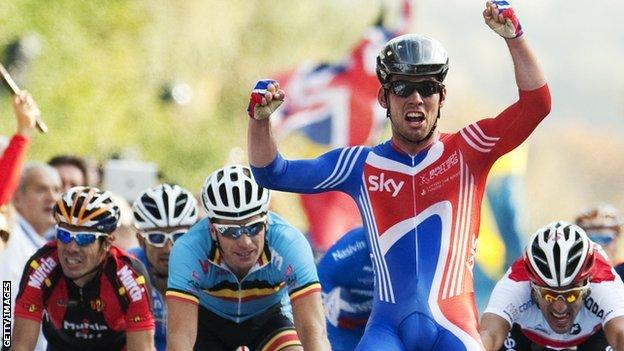 In 2011 Mark Cavendish, 27, became with victory in Copenhagen.

But this year's hilly 261km Netherlands course will not favour the sprinter.

Brailsford said: "We're here with an opportunistic mentality. After a four-year Olympic cycle, we could not be at the top of our game."

Tour of Britain winner Jonathan Tiernan-Locke has a riding style better suited to a course that requires competitors to tackle a 1,200m climb up the Cauberg hill 10 times and could be GB's best prospect.

The repeated ascents will make it tough for any team to control the race, as Britain did on a flatter course in Denmark last year to set up Cavendish's win.

In addition to Cavendish and Tiernan-Locke, the British team for Sunday's race will include Tour de France winner Bradley Wiggins and runner-up Chris Froome.

Spain's Alejandro Valverde and Joaquim Rodriguez are among the favourites to win the race, as is Belgian rider Philippe Gilbert.

Vos beat Britain's Lizzie Armitstead to gold in the 2012 Olympic road race and Pooley admits that the Dutch rider is favourite in front of a home crowd in Limburg.

"There's a lot of climbing in it but I don't think it's got my name all over it," she said.

"It's got Vos's name all over it, but it's another opportunity and I'll give it a good crack.

"She's going to want to win so badly. Her only weakness is her strength. She's so, so good."

Armitstead has withdrawn from the race due to illness, and has not been replaced in the British squad.