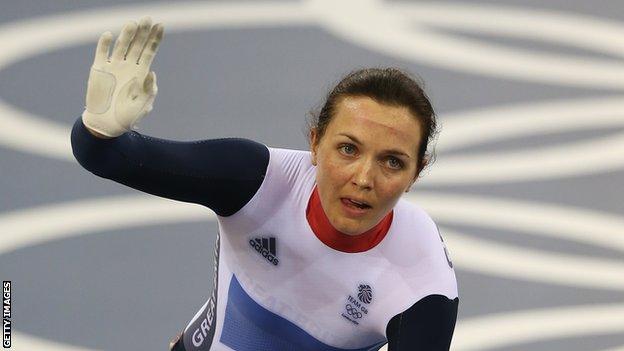 "It doesn't seem fair when you put in the same amount of training and you don't get the same opportunities," the double Olympic champion told BBC Sport.

She added "a female brain" is sometimes needed to get the best out of women.

The difference in resources between the sexes has been hotly debated, and fellow British riders Lizzie Armitstead - who won silver in the women's road race at London 2012 - and Emma Pooley have both accused the International Cycling Union (UCI) of treating female cyclists differently.

Domestically, Team Sky do not run a female professional side, although their Tour de France winner Bradley Wiggins said he was willing to fund one for women's cyclists, who he felt are "the forgotten ones".

The UCI has, however, unanimously approved a range of measures to improve the women's sport, which included the creation of a new tier of "hors categorie" road races for elite riders.

Pendleton, who won gold in the track sprint at Beijing 2008 and in the keirin at London 2012 plus nine World Championship titles in her career, recently retired from the sport but hopes women can achieve more coverage.

Her comments come after an incredibly successful London 2012 for female British cyclists where Laura Trott won omnium gold as well as in the team sprint with Dani King and Joanna Rowsell.

Pendleton won silver in the sprint along with her gold in the keirin, while Lizzie Armitstead came second in the road race.

She continued: "I think there are opportunities for girls to make a name for themselves. I do feel, however, on the road side of things, there could be more.

"The guys get a lot of exposure and a lot of coverage. It's a real shame the women's road side of things hasn't been promoted."

British Cycling and Team Sky boss Dave Brailsford talked about the "gender imbalance between the male and female side" in the build-up to the recent Road World Championships and told BBC Sport: "I don't think there is a simple answer but there's an answer. We'll be working at it and thinking about it and finalising soon."

The 48-year-old did not reveal whether the "answer" would entail the introduction of an elite female into the management and coaching structure at British Cycling, an act that ex-track rider Pendleton thought would be of tremendous benefit as "women generally need a different approach".

She said: "If I could change one single thing in British cycling then it would be to put an elite female in a high-up role within the structure.

"Someone who had power, authority and experience all at the same time. That, in one single move, would be the most helpful.

"It does take a female brain to work that out. A woman is more likely to have a different emotional intelligence to recognise if someone is struggling.

"I felt that I had to become more male in my approach and my persona in order to survive, rather than the sport catering to me. A lot of girls in the sport feel like this, I feel.

"I would consider coaching but it's not my time now to do it. I feel I haven't had enough experience of coaching to step in and really make a difference at a high level."