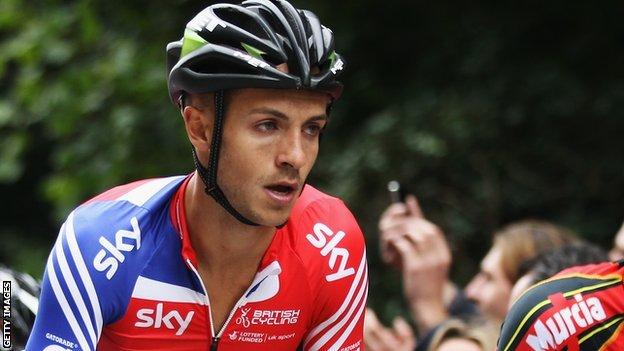 Tour of Britain winner Jonathan Tiernan-Locke has signed for Team Sky on a two-year deal.

The 27-year-old impressed last season for former team Endura Racing with the highlight being his Tour of Britain victory in September.

Tiernan-Locke was the first British rider to win the event in 19 years.

"Jonathan Tiernan-Locke's move to Sky has been one of cycling's worst-kept secrets (bettered only by Mark Cavendish's move away from Sky), but that is only because it makes such perfect sense. His win at the Tour of Britain capped a "Bradley Wiggins" kind of season, albeit at the level below the elite. But any doubts about his ability to ride with the best were dispelled a week later, when he finished a creditable 19th in the world road race. His has not been a smooth trip to the top - there has been illness, injury, bad luck and a stint in a bike shop - but he's got there, and few will be surprised if he wins a big race very soon."

"Although I've really enjoyed my time at Endura, I couldn't pass up the chance to join the world's best team," said Tiernan-Locke.

The Plymouth-born cyclist also won the Tour Mediterranean in 2012 and finished a commendable 19th for Great Britain at the World Road Race Championships in September.

"This season's results have given me a lot of confidence and I can't wait to compete at the very top of the sport. I'm under no illusions - it's going to be a big step up," he said.

"When you look at the season Team Sky have had, to even be considered by them was a massive honour for me, so I'm over the moon to be riding for them in 2013."

In 2005, Tiernan-Locke was struck down with a virus that forced him out of the sport and he opted to go to university before returning to cycling in 2008.

"We believe he is in the best place to achieve his full potential and are looking forward to having him on the team," said Brailsford.