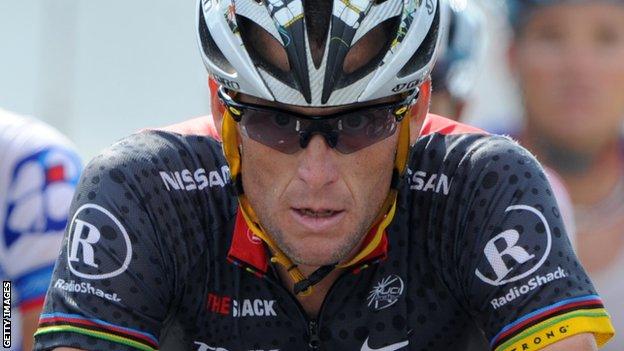 Lance Armstrong made "false and misleading" statements in a 2005 court case, according to a report by the US Anti-Doping Agency.

The 41-year-old, accused of being "a serial drugs cheat", was in court looking to win a case against an insurance company over bonus payments.

He stated under oath that he did not take any performance-enhancing drugs.

Usada says his statements in court were false and consequently "subject to the penalties of perjury".

Armstrong was looking to recover a £3.1m bonus from Texas-based insurance company SCA Promotions, who were reluctant to pay out following his sixth Tour de France win amid rumours of his possible use of performance-enhancing drugs.

It was while under oath at the Dallas court that the Usada's report says Armstrong stated untruthfully:

Armstrong received a settlement of around £4.7m, made up of the original bonus plus interest and lawyers' fees.

It is not yet known if the SCA will take legal action against Armstrong based upon the findings of the Usada report.

Former sprinter Marion Jones was sentenced to six months in prison for pleading guilty to two counts of perjury in 2008.

Jones won five medals at the Sydney Olympics but forfeited them after admitting in 2007 that she had used steroids between September 2000 and July 2001.

She also confessed to lying to a federal investigator in 2003 when she denied using performance-enhancing drugs.

Jones was imposed with the maximum sentence under her plea deal "because of the need for general deterrence and the need to promote respect for the law".