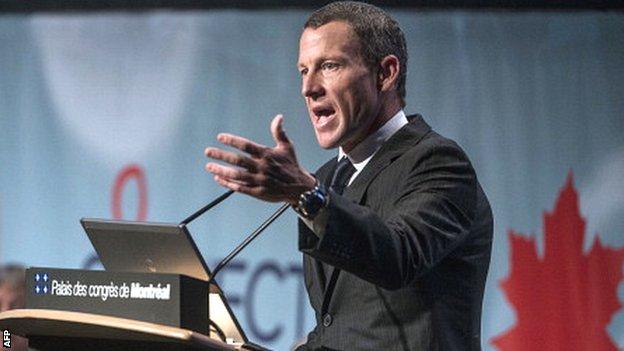 Lance Armstrong's lawyer says he would accept the outcome if lie detector tests were taken by witnesses who have accused the 41-year-old of doping.

A US Anti-Doping Agency report described Armstrong as a "serial cheat" and a "bully", citing 26 witnesses.

Asked whether Armstrong would also be prepared to take a test, he said: "We might do that, you never know."

Armstrong was stripped of the seven Tour de France titles he won between 1999 and 2005 after Usada concluded he had led "the most sophisticated, professionalised and successful doping programme that sport has ever seen".

Herman maintains the information provided by some of the witnesses cannot be relied upon, identifying several as "liars" - and he said he was "a proponent, personally" of lie-detector tests being used in the case.

"Many witnesses have contradictory stories to tell," he said.

"Lance had over 600 fellow riders, team members [and] trainers in his career racing in Europe.

"Of those, 11 came forward. Many others would and have refuted many of the allegations. Other than Tyler Hamilton, Frankie Andreu, Floyd Landis and Jonathan Vaughters I'm not calling anyone a liar - but I am calling those four liars."

Asked why Armstrong had not challenged the claims set out by Usada, Herman told the BBC's Sportsweek on Radio 5 live: "He's moved on. His name is never going to be clear with anyone beyond what it is today.

"People are fans. Most of the people that I've talked to, this is their opinion - it is 'we don't care whether he did or he didn't'."