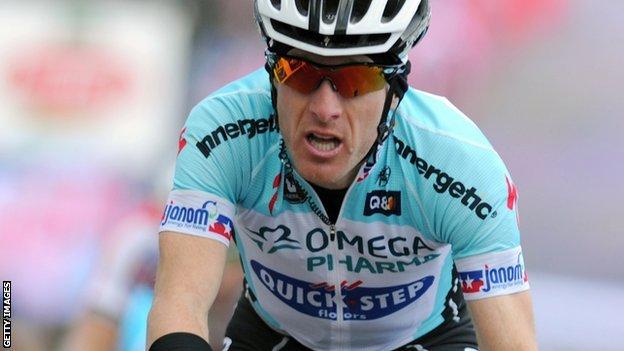 Levi Leipheimer has been sacked by his Omega Pharma-Quick-Step team after admitting to doping while a team-mate of Lance Armstrong.

The American was one of 11 riders to testify against Armstrong to the United States Anti-Doping Agency (Usada).

Usada has accused the US Postal Service team of running "the most sophisticated and successful doping programme that sport has ever seen".

Leipheimer is currently serving a six-month suspension for doping violations.

A statement issued by Omega Pharma-Quick-Step read: "We commend the rider for his open co-operation with Usada and contribution to cleaning up the sport of cycling.

"However, in the light of the disclosures made by Mr Leipheimer in his public statement on 10 October, the team has decided to terminate the contract.

"This decision has the full support of the team owner, the board represented by Mr Bessel Kok and team manager Mr Patrick Lefevere."

Leipheimer, 38, was a team-mate of Armstrong for five years at the US Postal Service, Astana and RadioShack teams.

Leipheimer had been provisionally suspended by Omega Pharma-Quick-Step because of the evidence he gave to Usada.

Armstrong, who has always denied doping but chose not to fight the charges filed against him, has been labelled a "serial" cheat by Usada.

The 41-year-old has also been provisionally stripped of his seven Tour de France titles by Usada, whose report is now being looked at by the International Cycling Union (UCI), the sport's world governing body.