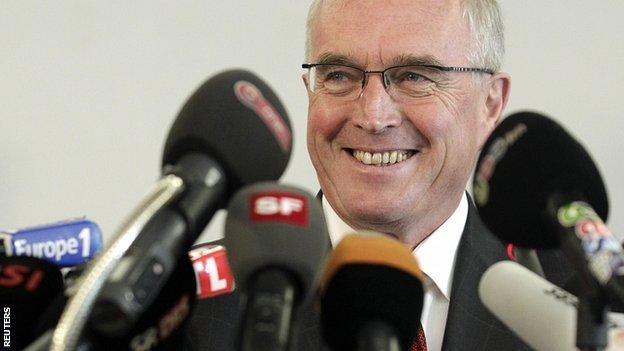 The UCI accepted Usada's investigation into Armstrong and stripped the Texan of his seven Tour de France titles.

"Pat McQuaid's comments expose the hypocrisy of his leadership," Hamilton said in a statement.

"Instead of seizing an opportunity to instill hope for the next generation of cyclists, he continues to point fingers, shift blame and attack those who speak out, tactics that are no longer effective.

"Pat McQuaid has no place in cycling."

Former Armstrong team-mates Hamilton and Landis said the UCI covered up a positive test from Armstrong for the banned blood booster EPO at the 2001 Tour de Suisse.

McQuaid, however, denied covering up a test, producing what he said was evidence that an Armstrong sample was "suspicious", not "positive".

Of Hamilton and Landis, McQuaid added: "Another thing that annoys me is that Landis and Hamilton are being made out to be heroes.

"They are as far from heroes as night and day. They are not heroes, they are scumbags. All they have done is damage the sport."

World Anti-Doping Agency chief John Fahey has added to the pressure on the UCI by demanding that further action is taken to root out those still in the sport with a doping past.

"I look forward to seeing what they [the UCI] propose to do for the future to ensure what we've seen through this Armstrong debacle doesn't happen again," he said.

"They clearly have to take the blinkers off, look at the past, examine the people who are there, ask themselves the questions, 'Are those same people still in the sport and can they proceed forward with those people remaining?'.

"I don't think there's any credibility if they don't do that and I think they need to get confidence back into the sport so that its millions of supporters around the world will watch and support the sport going forward."

Fahey's comments came as another of Armstrong's former team-mates admitted to doping.

Norwegian Steffen Kjaergaard said he began using banned substances - primarily EPO and cortisone - in 1998, prior to joining Armstrong's US Postal Service team in 2000.

"The reason that I am coming forth now is that I have had a big problem with my own conscience," Kjaergaard said.

"I have long thought that it was best for cycling as a sport that I took this [secret] to the grave. But the last weeks have made me change course for my own sake and tell the truth."

However, Kjaergaard denied being aware of team-wide doping.

"When I was a part of the U.S Postal Service team, everything was organised by the team," he added. "I did not need to arrange for a doctor or do anything by myself.

"I can assume that others at US Postal were using something that the witness reports said. I have no direct knowledge, though."

Meanwhile, Belgium's five-time Tour de France winner Eddy Merckx says he is sickened for his sport in the wake of the Armstrong scandal.

Merckx said: "I met Lance many times. He never spoke to me about doping, doctors or other things. He didn't have to report to me either, it was his problem but I fell into the trap."

He tested positive for a stimulant at the 1969 Giro d'Italia and was disqualified from the race.