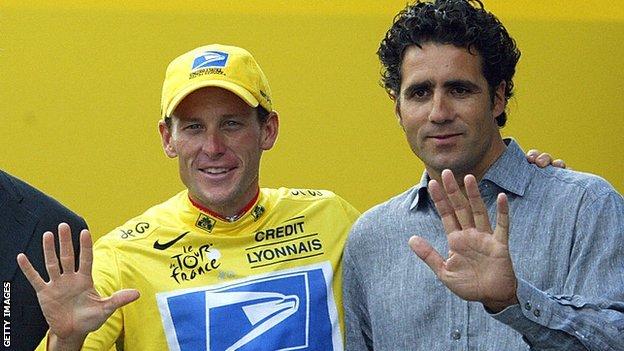 The International Cycling Union (UCI) has accepted the findings of the United States Anti-Doping Agency's (Usada) investigation into doping and stripped Armstrong of his seven Tour titles.

"Even now I believe in his innocence. He has always respected all the rules," Indurain told Radio Marca in Spain.

"I'm a bit surprised. It's strange that this was only based on testimonies."

Indurain, who won his titles between 1991 and 1995, added: "I think he will come back and appeal and try to show that he played fair for all those years."

The UCI's decision to annul Armstrong's results from 1 August 1998 once again makes Spanish legend Indurain the joint record-holder in the Tour, alongside Belgium's Eddy Merckx and Frenchmen Bernard Hinault and Jacques Anquetil.

He is not the only cyclist to have spoken out in support of Armstrong.

Fellow British cyclist Alex Dowsett, who rode for the US-based Trek-LiveStrong squad, called Armstrong a "legend" for his battle back from cancer.

"He seems to be the one everyone is picking on, probably as he was the most successful."