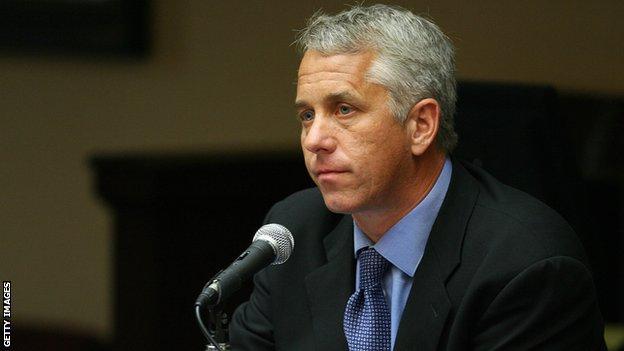 In an open letter on Facebook, LeMond was critical of McQuaid and predecessor and honorary president Hein Verbruggen.

"I have never seen such an abuse of power in cycling's history. Resign, Pat, if you love cycling. Resign even if you hate the sport," said LeMond.

The UCI has been accused of covering up a positive test from Lance Armstrong.

"I want to tell the world of cycling to please join me in telling Pat McQuaid to resign," added LeMond, who has backed a campaign in support of former Sunday Times journalist Paul Kimmage, who is the subject of a defamation suit brought by McQuaid and Verbruggen.

The 1986, 1989 and 1990 Tour winner has made a donation to the fund to support Kimmage's legal fight, but would prefer money is used to "lobby for real change".

The 51-year-old added: "The sport does not need Pat McQuaid or Hein Verbruggen - if this sport is going to change it is now. Not next year, not down the road, now! Now or never!

"People that really care about cycling have the power to change cycling."

Armstrong's former team-mate Tyler Hamilton has also called for McQuaid to step down.

LeMond, who has long been critical of his compatriot, is now the only American to win the Tour after Armstrong was stripped of his seven titles and Floyd Landis was removed as the 2006 winner for doping.

Armstrong, 41, and his United States Postal Service team ran "the most sophisticated, professionalised and successful doping programme that sport has ever seen," a 1,000-page United States Anti-Doping Agency report concluded.

Landis, a former colleague of Armstrong's who now admits to using drugs, claims this was hush money to cover up a positive test for the banned substance EPO collected from Armstrong during his victory at the Tour of Switzerland in 2001.

The UCI admitted it received money from Armstrong in 2002, but had already said in 2010 that this was not part of a cover-up.

When he was asked by BBC sports editor David Bond how he could justify the payment, McQuaid said: "We used the money against doping; it was done openly and put to good use."

A special meeting of the UCI's management committee will take place on Friday to discuss the "exact sporting consequences" of the decision to strip Armstrong of his titles, including whether the 1999 to 2005 Tour titles and prize money will be redistributed.

"The UCI is there to provide leadership and that's what they need to do. The key thing about these situations for those in leadership roles is that you have to learn," he said.

"If you can't learn and put in place some changes, that's an error in my view. But now is the time to stand up and show some leadership. Make changes, make changes - that's what I'd like to see."