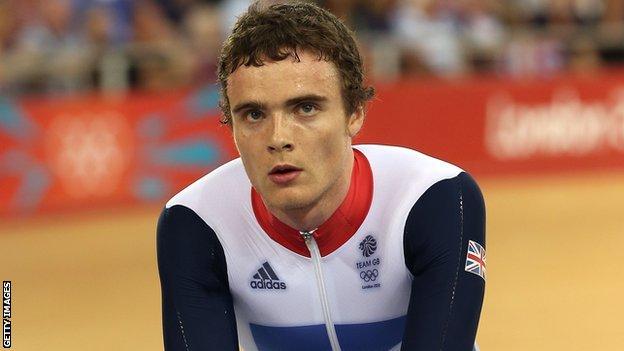 Olympic champion Steven Burke says the Lance Armstrong scandal cannot detract from what he believes is the greatest era in British cycling history.

Burke, who won gold in the team pursuit at London 2012, is competing in the first round of cycling's Revolution Series in Manchester on Saturday.

"We've had the Olympics and Bradley Wiggins winning the Tour de France. And this era is a lot cleaner."

Burke, who also won bronze in the individual pursuit at the 2008 Olympics, added that drug cheats "are becoming more of a minority in the sport".

"We've moved on from what happened in that [Armstrong] era. It's the most tested sport in the world and that's why more dope cheats are exposed.

"What with the success on the velodrome in London - seven golds, a silver and a bronze - and Bradley winning the Tour as well, cycling is getting bigger by the year.

"You see more kids out on their bikes and participating competitively. The taster sessions at the velodrome in Manchester are always booked up, which is good to see."

Saturday's event at the National Cycling Centre will be Burke's first competitive appearance since his Olympic triumph.

And the man from Colne, Lancashire, has poignant memories of the event, in which he announced his potential to the British public eight years ago.

"It gives you that great experience of racing in front of a big crowd and allows you to develop before moving on to the world stage.

"Some of the talent we'll see in the youth races and Future Stars league on Saturday will hopefully become Olympic champions in a few years to come.

"It's always a great event, a great spectacle. Some big, big names have participated - Mark Cavendish participated in a round last season.

"And on Saturday there's myself and Ed Clancy [who won gold and bronze in London] and Jody Cundy, who won a bronze at the Paralympics."

Cundy will be racing against Burke and other able-bodied athletes in the team championship in Manchester.

The National Cycling Centre plays host to the first three events in the Revolution Series (Saturday, 1 December and 5 January) before the final leg at the Sir Chris Hoy Velodrome in Glasgow on 2 February.