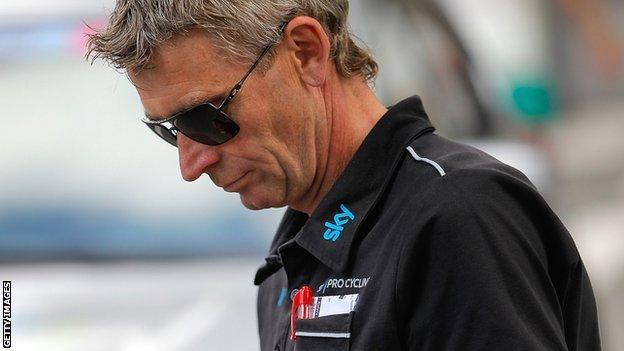 Team Sky sporting director Sean Yates has retired from cycling after three decades in the sport.

Yates had held the role since 2010 and was instrumental in Sky's Tour de France success in the summer.

Sky said Yates's decision was not related to doping, despite the team's zero-tolerance approach to drugs.

Losing Sean Yates, like this, is a huge blow for Team Sky. While he may have upset a few riders last year, he did what he was asked to do: get Bradley Wiggins in yellow. He will be missed. But there are also implications for the team's 'zero tolerance' anti-doping policy. That few in the sport are buying Yates's denials is one thing; that a growing number are questioning the credibility of Sky's holier-than-thou recruitment process is far more damaging.

Yates added: "I realise the timing of my retirement will lead to speculation but I can walk away with my head high knowing I have done nothing wrong."

Following the Lance Armstrong scandal, when the American was stripped of his seven Tour de France titles after a United States Anti-Doping Agency report described him as a "serial" doping cheat, the British team asked staff to sign a statement guaranteeing they had had no previous involvement in doping.

And in a statement, Team Sky added: "After Team Sky reaffirmed its position on anti-doping, the management team started a series of individual interviews with riders, management and support staff.

"Sean has been interviewed and there were no admissions or disclosures that would have required him to leave the team."

He is one of only five Britons to wear the yellow jersey and also won stages in the Tour and Vuelta a Espana in 1988.

Yates rode with a young Armstrong at Motorola and, after moving into coaching, was reunited with Armstrong at Discovery in 2005, when the American won the last of his seven now rescinded titles.

Armstrong and Yates also worked together in 2009 at Astana, when Armstrong finished third behind team-mate and winner Alberto Contador.