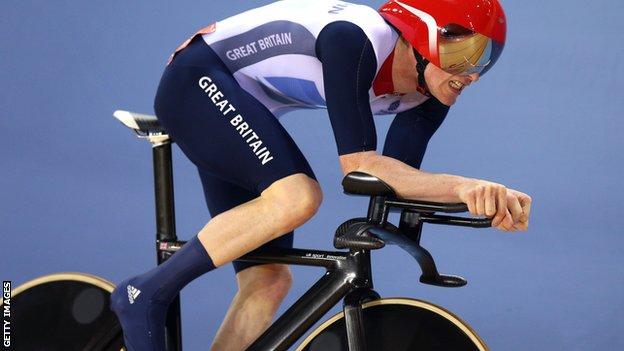 Double Olympic champion Ed Clancy is one of seven gold medallists from London 2012 named in the Great Britain team for next month's Track World Cup.

The 27-year-old endurance specialist will combine with Jason Kenny and Philip Hindes in the three-man, three-lap team sprint event in Glasgow.

Staged at the Sir Chris Hoy Velodrome, the event runs from 16-18 November.

Burke and Andy Tennant, a world champion who was a non-riding reserve at the Olympics, are joined in the men's team pursuit squad by Track World Cup debutant Jon Dibben, Owain Doull, Simon Yates and Sam Harrison, who won World Championships bronze in the event in 2011.

Completing the 15-rider group are Becky James and Jess Varnish, who will ride in the women's sprint events.

Varnish focused on the team sprint for the Olympics, competing with Victoria Pendleton, but judges disqualified the duo for a takeover infringement.

British Cycling performance director Dave Brailsford said of the forthcoming competition: "The period of time immediately after an Olympics is an interesting one for the team as it allows us to try out new line-ups and look at how the younger squad members are developing."