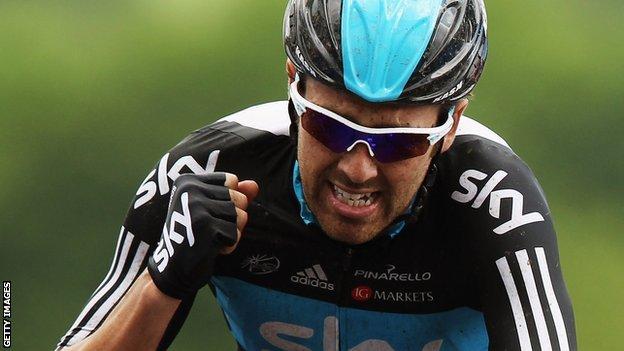 The 24-year-old from Essex joined Sky as a neo-pro rider in 2011 from the US-based Trek-Livestrong development team.

He has since shown his potential as a top time triallist, winning the British title in 2011 and 2012 and finishing eighth at this year's World Time Trial.

"It gives me new opportunities and Movistar have been itching to have me," Dowsett told BBC Essex.

"It's been fantastic at Team Sky. I thank them for everything they have done for me."

Dowsett missed out on a place in Great Britain's Olympic cycling team when his preparations were hampered by an elbow injury.

on the decision to allow drug cheats to represent GB at London 2012, with David Millar, who admitted to taking performance-enhancing drugs in 2004, included in the squad.

He made headlines earlier this month when in the aftermath of the American's drugs ban.

But Dowsett said he was referring to what Armstrong had achieved in the fight against cancer and added he would not want to shake the Texan's hand.

The move to Movistar gives the Commonwealth Games silver medallist the opportunity to step into the main body of a team and to challenge for tour stage victories.