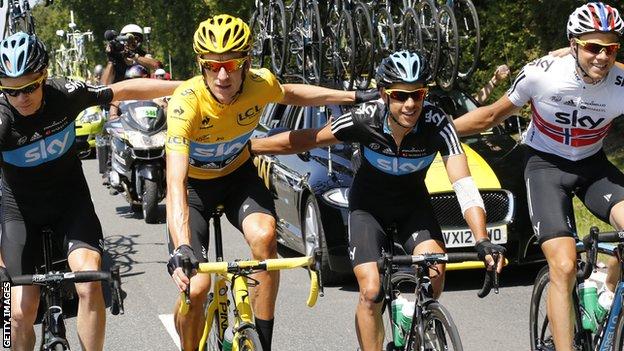 Dave Brailsford made two big promises in 2009 when he announced the formation of a British-based cycling team for the following season.

No longer satisfied with just Olympic domination, Team GB's commander-in-chief was going to use BSkyB cash to take the first home-grown rider to victory in the Tour de France within five years, and he was going to do it with a team untainted by doping.

It says much about the relative innocence of the time to note it was the first of those ambitions that provoked the most comment, and when questions were asked about the second half of the mission statement they were to do with what it meant for reformed doper David Millar's chances of employment.

So why does it feel like Team Sky are in disarray, while Garmin-Sharp are being touted as the future of the sport?

Millar, it turned out, would become the proof of that commitment to zero tolerance. Contrite (and definitely good) enough to ride for Brailsford's GB teams at the 2011 Worlds and 2012 Olympics, the Scot had a two-year gap in his CV that Brailsford's Team Sky could not ignore.

This restatement of the pledge to do things differently, beyond reproach and without compromise, was underlined by the fact that Millar and Brailsford are friends. It should also be remembered that in 2009 the rider was already well along the road to rehabilitation with the team that would become Garmin-Sharp by the time Bradley Wiggins delivered on the first, and much derided, half of Brailsford's brag three years later.

Team Sky won 49 other races in 2012 to finish top of cycling's world rankings by almost 500 points (which is more than five of the UCI WorldTour's 18 teams managed all year).

Garmin-Sharp, on the other hand, finished the year in the middle of the rankings, and with three riders serving six-month bans for their parts in the doping conspiracy that helped Lance Armstrong "win" a record seven Tours de France between 1999 and 2005.

So why does it feel like Team Sky are in disarray, while Garmin-Sharp are being touted as the future of the sport?

That is a question many in cycling have been asking since the United States Anti-Doping Agency (Usada) dumped 1,000 pages of evidence online to bury Armstrong's already tattered reputation as a sporting hero.

The tarnished Texan grabbed most of the headlines, but Usada's investigation damned a generation. When the sport's governing body, the UCI, was finally forced to respond to this indictment of its own incompetence, nobody was surprised to hear it would not be reallocating Armstrong's titles.

Estimates of just how bad cycling's drugs problem was during the Armstrong era vary, but one expert told me this month he thought "90% of riders over the age of 35 had doped at one time, to some extent".

Who has left Team Sky?

It says much about the lost innocence of today that a comment this depressing does not seem excessively pessimistic. This was the polluted talent pool from which Brailsford had to recruit.

Recent weeks have seen three senior members of staff leave Team Sky, two having admitted to doping over a decade ago, and a retiring rider confess to having lied to the team about his past on at least two occasions. These four followed team doctor Geert Leinders out of the door, although he was eased out a few weeks before Usada boiled Lance.

Of course, we all now KNOW guys like Michael Barry, Steven de Jongh, Bobby Julich, Leinders and Sean Yates had skeletons in their bike bags.

But can we really say we KNEW this then?

Strongly suspected, sure: but to the extent Usada's investigation, and the ones under way in Italy and Spain, have revealed?

I am not so certain about that but some have already made their minds up. For them, the case for the prosecution is clear: Brailsford knew how unlikely it was to find a dozen clean riders to add immediate competitiveness to his talented youngsters from British Cycling's academy; and he was insulting people's intelligence if he thought he could hire another dozen good apples to fill the coaching ranks.

Zero tolerance, they say, was a charade to entice sponsors and fool thousands of new fans into thinking Team Sky was not like those nasty cheats from the bad, old days.

It would have been far better, they conclude, if Brailsford had copied the more pragmatic model established by Jonathan Vaughters at Garmin-Sharp.

Vaughters, like Barry, was one of the 11 former team-mates of Armstrong who testified against him, admitting his own use of performance-enhancing drugs in the process. Having already done so in print, and hinted at it a number of times previously, his mea culpa was greeted with zero surprise.

Somewhat more surprising, however, was the fact that three of his riders - Tom Danielson, Christian Vande Velde and David Zabriskie - also made confessions, for which they have received reduced bans.

There is also no doubt that Garmin-Sharp are "one of the good guys": they were early adopters of the no-needles policy, and they have an admirably open attitude to testing data and training methods.

So far, so much better than what went before. But is it also "better" than Team Sky's attempt to be clean from the beginning?

The cycling world gathered in Paris last week for the announcement of the route for the 2013 Tour de France, the race's 100th edition. Vaughters was there with both his Garmin-Sharp hat on, but also as president of the Association International des Groupes Cyclistes Professionels (AIGCP).

The AIGCP represents the teams and it used its traditional pre-Tour route launch powwow to formulate a response to the LA smog that threatens to choke the cycling's undeniable recent progress against doping.

I bumped into Vaughters as he came out of this meeting and I put it to him that there are currently three approaches to running a team: his way, Brailsford's way and the way of the ostrich.

Wearing his AIGCP hat, he could not comment, but it strikes me as interesting he is not seeking another term as president in 2013. Trying to find common ground in a room full of men that includes Brailsford, the ever-controversial Bjarne Riis and Armstrong's friend Viatcheslav Ekimov, must be tiring.

But he did have an answer for my question about Team Sky's approach being naïve.

"In my opinion, the best way to go is to have a truth and reconciliation process that looks at everything that has gone on over the last 20 years, with all the main actors involved, and say 'let's move forward with zero tolerance', absolute, concrete zero tolerance."

Speaking in Paris a day later, he said: "[Vaughters] and I have a lot more in common than people think. We both run clean teams, we both want a clean sport, and we have some very similar ideas on how we can achieve that.

"But we decided to set out with a certain approach - it doesn't have to be everybody's approach - and we're going to stick to it.

"Some have said people are getting 'kicked out' but it's not like that. We've decided to sit down and talk with every member of staff, ask them if they represent a risk to the team, and support them if they do - it's been very constructive."

With hindsight, trying to change things for the better, so quickly, while trying to win Grand Tours, might have been a tad naïve. It was certainly ambitious.

But Brailsford's response to the Armstrong crisis has not been a PR stunt, smokescreen or any other act of deception he has been accused of by some online critics. It has been an example of leadership.

It has also received the unequivocal support of BSkyB, which backed zero tolerance in 2009 and backs it now, even if that means, as is possible, there will be more vacancies at the team in the coming weeks.

The re-interview process has not finished and there are still riders and staff with questions to answer. Finding replacements will be no easier in the current market than it was in 2009, but I would be surprised if Brailsford gets burnt again.

"If you want to improve, or change something for the better, particularly in cycling where there is a history, you have to make some sacrifices," he added.

"If you continue doing more of the same, you end up in the same place. They've proved that time and time again in this sport."