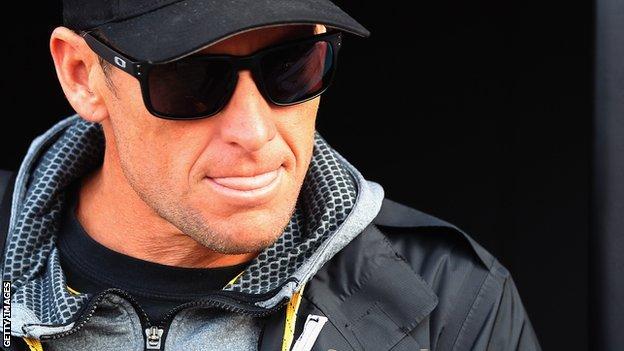 Usada claimed the 41-year-old American had led "the most sophisticated, professionalised and successful doping programme that sport has ever seen".

Armstrong has since been stripped of his seven Tour de France titles.

Wada says it conducted a "full and careful review" into Usada's "reasoned decision" against the American rider.

The International Cycling Union (UCI), which has also accepted the Usada findings, has commissioned an independent investigation into the Armstrong affair, which Wada has welcomed.

"Following the UCI management committee's announcement last week, Wada now awaits with considerable interest the details of the independent inquiry that is proposed, including its composition and terms of reference," said Wada president John Fahey.

"It is important that there now be genuine independence and a complete examination of the scenario, with a panel that has full powers of inquiry and access to all required evidence and information.

"Only with the necessary independence and terms of reference will the inquiry be able to properly address the systemic culture of doping that was allowed to develop in cycling during this time.

He added: "Wada will want to contribute to the inquiry if it is established and resourced beyond reproach.

"This is not a situation in which just because the athlete did not return a positive test there was nothing more the governing body of cycling could do.

"It has taken a major effort and undertaking from a national anti-doping organisation to gather the compelling evidence following allegations raised by Floyd Landis in 2010.

"This case has resulted in a right and proper sanction for the athlete in question and has served as a revelation to the world of sport. For this Usada must be applauded."