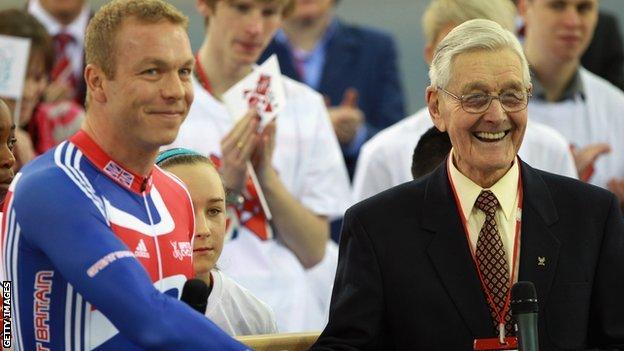 Godwin, who was heavily involved in the sport throughout his life, died at the Marie Curie Hospice in Solihull.

He won two bronze medals at the 1948 Olympics in London, in the team pursuit and kilometre time trial.

When the Games returned to the capital this year, Godwin carried the Olympic torch through Solihull and was a keen supporter of Team GB at the velodrome.

Sir Chris Hoy said on Twitter: "So sad to hear cycling legend and Olympic medallist from 1948, the great Tommy Godwin, has passed away."

Godwin managed the British cycling squad at the 1964 Games in Tokyo, was president of the British Cycling Federation, ran the first British training camp in Majorca, and founded the Birmingham RCC.

He became Britain's first paid national coach in 1964 and trained a generation of British track riders, including Graham Webb, who beat the British hour record and won the world road race championship, and Mick Bennett, who won bronze medals at the 1972 and 1976 Olympics.