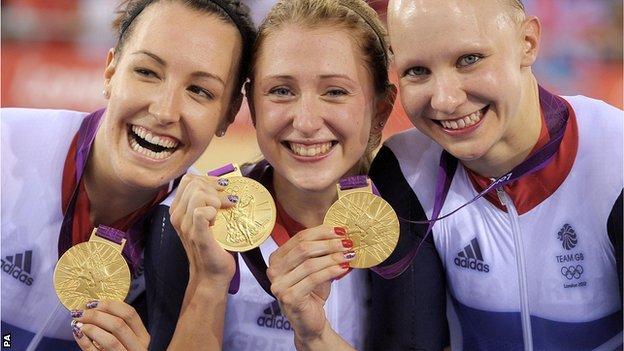 "Wiggins's support will further enable the girls to fulfil their potential out on the road," read a team statement.

Trott won the six-discipline omnium in the London 2012 velodrome and partnered King and Rowsell to team pursuit gold.

The 20-year-old, who also rode to 2012 world championship gold in the team pursuit with King, 21, and 23-year-old Rowsell, said: "I'm excited and look forward to being part of what I believe will be one of the most professional and most successful teams next year.

"I'm looking forward to gaining more experience on the road with such a great team."

DTPC, which will be registered in Britain, is owned and managed by Australia's Commonwealth champion Rochelle Gilmore, who will also ride on the team.

Rowsell, a three-time world team pursuit champion, wrote on Twitter: "Pleased to announce I will be riding for DTPC Honda in 2013! Looking forward to a big year of road racing."

King said: "So excited to announce I'll be riding for DTPC Honda next year."