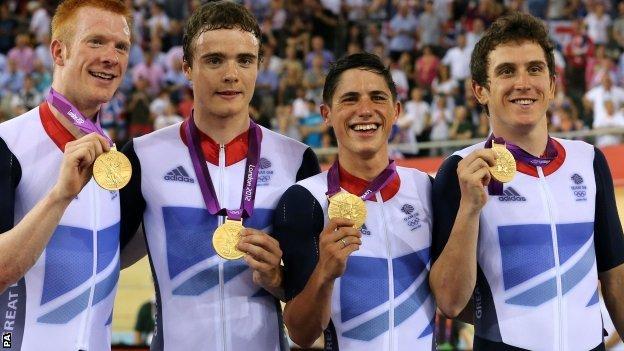 Britain's double Olympic champion Ed Clancy has warned he will "not set the world on fire" in the team sprint at this week's Track World Cup in Glasgow.

Team pursuit specialist Clancy will fill the spot vacated by Sir Chris Hoy, who anchored the trio of Philip Hindes and Jason Kenny to gold at London 2012.

Clancy told BBC Sport: "I don't want people to look at me as the next Hoy.

"I've got nothing to lose. If I have an awful race I haven't lost anything. I don't want to let Phil and Jason down."

The 27-year-old Yorkshireman is the oldest rider in an otherwise youthful and experimental British team for the second World Cup event of the season, at the Sir Chris Hoy Velodrome - which will be used for the Commonwealth Games in 2014.

He admitted he was facing a tough baptism, adding: "Getting off the line in the team pursuit is no problem but then you come into the team sprint and it's like a completely different sport.

"You look down the line and it's like having two weightlifters and they come hoofing off the line like a motorbike and you're desperately scuttling to try and get on their wheel.

"Once you are on the wheel, the speed is something you're used to from riding in the team pursuit, it's just the acceleration getting there is pretty violent.

"If I'm there with them after one lap it will go alright but I could be riding around on my own for three laps."

Clancy's sprinting talents were only noticed by British coaches after his flying lap and 1km time trial in the six-event omnium, where he won bronze, at the London 2012 velodrome.

His time of one minute, 0.981 seconds in the kilo would have been quick enough to win the world title in 2008.

"With Chris [Hoy] taking this season out we've been looking to find a man three - [Ed] has thrown his hat in the ring.

"Training so far has been really promising, the main thing for him is to get on the start behind Philip and Jason and then we'll only see in Glasgow what he can do in man three."

Because of Clancy's switch to the team sprint and Steven Burke's withdrawal, none of the men's 4,000m Olympic-gold winning pursuit team will be in action.

In Clancy's absence, 18-year-old Jon Dibben, who rode in the junior men's road race at the 2012 World Championships and won bronze in the 2011 Commonwealth Youth Games, will make his World Cup debut in the endurance races.

Fellow teenagers Owain Doull and Joe Kelly, both 19, are joined by 20-year-old pair Sam Harrison and Simon Yates in the squad.

Fellow Olympic champion Joanna Rowsell has had a virus and will miss the event, which starts on Friday and runs until Sunday.

Her absence breaks up the reigning world and Olympic champion team of Rowsell, Laura Trott and Dani King in the 3,000m women's team pursuit - a trio that has lowered the world record in each of their last six rides.

However, in 18-year-old Elinor Barker, Britain has an able replacement.

Barker, who has the world junior road time-trial and European junior individual pursuit titles on her CV, is unlikely to be overawed, having also won team pursuit silver for Wales in the first World Cup event in Colombia in October.

Fellow Welsh rider Becky James, 20, will look to continue her decent start to replacing the retired Victoria Pendleton in the women's sprint events.

Pendleton was partnered by Jess Varnish in the team sprint at the Olympics, where the pair were disqualified for an illegal change-over.

Varnish, 21, has since joined James and the pair sprinted to victory in Cali last month - James took the first lap in that competition but Van Eijden expects roles to be reversed in Glasgow.

"It's our long-term projection that Jess will be in position one and Becky will ride in position two," said Van Eijden.

James, who won four sprint titles at the British Cycling National Track Championships in September, will also compete in the individual sprint and keirin - the eight-lap race which is paced by a motorbike before it pulls off, leaving the racers to sprint to the line.

The event is the second of the season as Britain's track cyclists continue their quest to make the team for the Rio Olympics in 2016.

The third World Cup takes place in Mexico in January 2013 with the World Championships following in February.