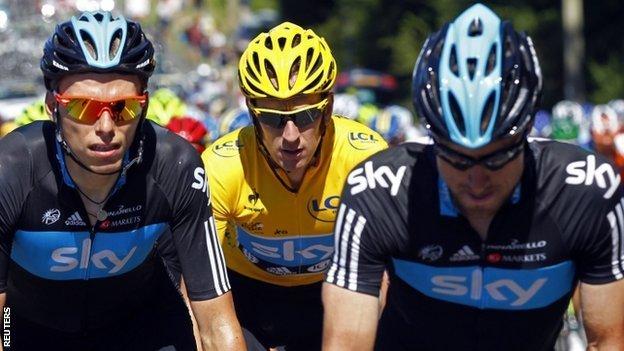 Stephens was head coach and programme manager at the Australian Institute of Sport and Triathlon Australia.

"I'm looking forward to contributing to the team and bringing in new ideas through my sport science and coaching knowledge of triathlon," he said.

Yates, who guided Bradley Wiggins to victory in this year's Tour de France, retired from cycling but De Jongh and Julich departed in the aftermath of the Lance Armstrong doping scandal.

Team Sky has a zero-tolerance approach to drugs and, following the Armstrong revelations, asked staff to sign a statement that they have had no previous involvement in doping.

Both De Jongh and Julich admitted to using performance-enhancing drugs during their cycling careers and subsequently left their roles.

Stephens, 37, meanwhile, is regarded as one of the world's best triathlon coaches and recently worked as head coach to the Australian national team at the London Olympic Games.

He has coached junior and elite athletes throughout the last four Olympic cycles and will work alongside head of performance Tim Kerrison at Team Sky.

"I look forward to the challenges of understanding the intricacies of a new sport and assisting Team Sky build upon the enormous success they have already achieved," Stephens said.

"I have watched their outstanding performances with interest over the last three years and have been impressed by how they have assembled their team and introduced innovative performance strategies to cycling."

And like Kerrison, who moved to Sky from a swimming background, Stephens will offer the team expertise from another sport.

Brailsford said: "It is incredibly exciting to be bringing fresh expertise into the sport and further reinforces this team's desire to break new ground in the field of performance."