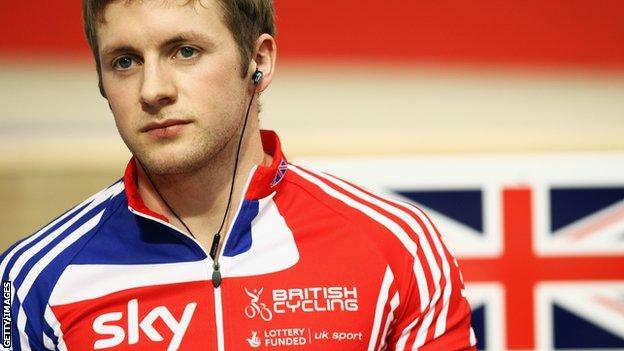 Triple Olympic champion Jason Kenny wants to use this week's Track World Cup in Glasgow as a catalyst to help him add to his solitary world title.

He told BBC Sport: "I had to win three Olympic gold medals before I realised I wanted to win the rest of the time.

"Between now and Rio 2016 I want to be on the top step, rather than second or third and Glasgow is the start."

Kenny won the individual and team sprint gold medals at London 2012 to add to the team title he won in Beijing. After going through a post-Olympics period where he "was not able to face training", the Bolton cyclist is again "keen to get some medals won".

"Halfway through the last [Olympic] cycle it was so bad. It was so rubbish and everything was going wrong but I turned it around and had a good run into London and won two gold medals.

"I want to keep that feeling going and try to get on the top step at the worlds more often."

Kenny will again race with Philip Hindes in the team sprint on Friday but the man that anchored the trio to gold in London, Sir Chris Hoy, is taking some time off.

Ed Clancy, one-quarter of the victorious men's team pursuit foursome, is taking Hoy's place in the Glasgow velodrome that is named after the six-time Olympic champion, and Kenny is confident that the Yorkshireman will do well.

"He's come from the sprint side of team pursuit," said Kenny. "Potentially it could be a really good team and I'm really excited to be a part of it."