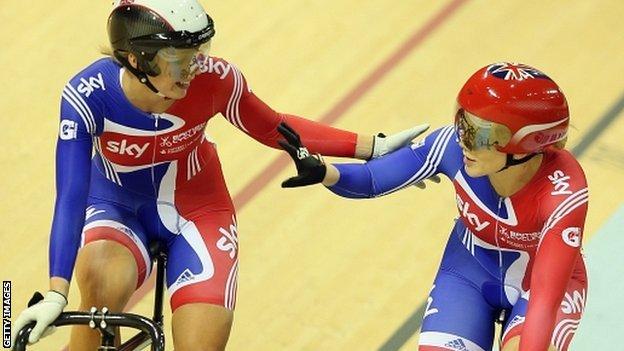 England's Varnish, who partnered the now retired Pendleton in the team sprint at London 2012, beat James 2-1 in the individual sprint semi-final.

However, Kristina Vogel of Germany proved too strong in the final and took gold with a 2-0 victory.

"It was good," said Varnish, 21. "It's nice to be actually in a final. I just want to be able to step it up another level now. I'm not in the best shape, so I've not played all my cards.

"It's really nice to gain experience at the moment and build on to the Worlds (in Minsk in February)."

James said: "It's been such a hard day, getting three rides up against Jess was really tough and then missing out on the gold/silver ride-off was hard.

"I had to get my head round it and I did not want to come away with no medal, so I'm really happy."

Both James and Varnish will ride in the keirin in Glasgow on Sunday, which will also see Olympic and world champion Laura Trott going for gold in the omnium.

The 20-year-old goes into the final day in fourth place at the halfway stage her event, just one point behind Australia's Ashlee Ankudinoff.

A dramatic crash ended triple Olympic gold medallist Jason Kenny's bid to win gold in the keirin, and the Briton has