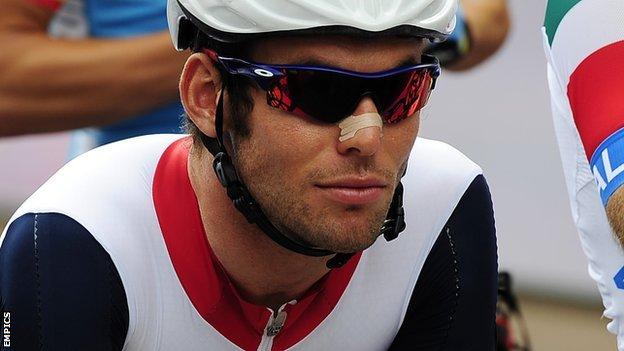 Britain's Mark Cavendish has been involved in a collision with a car while training in Italy but says he is "relatively OK".

The car braked in front of Cavendish and the 2011 world road race champion went into the back of it.

"Went & hit the back of a car that slammed on today in training. Wasn't ideal," 27-year-old Cavendish, from the Isle of Man, posted on Twitter.

"Apart from a bruised arm, I'm relatively ok. If anyone cares."

Wiggins spent a night in hospital with rib and hand injuries after being knocked off his bike near a petrol station close to his Lancashire home.

Sutton, who is also Team Sky's head coach, is recovering from bruising and bleeding on the brain as well as a fractured cheekbone following an accident cycling along the A6 near Manchester suburb Levenshulme.