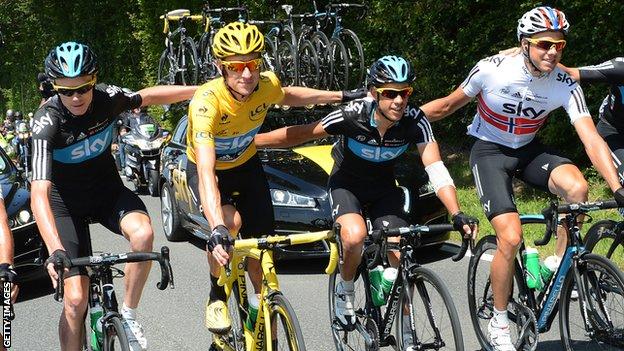 Team Sky boss Dave Brailsford is looking for a permanent European training base for his Tour de France-winning squad.

The British-registered team are officially based at Manchester's National Cycling Centre, home to the GB Olympic and Paralympic set-ups.

Team Sky's coaches, riders and support staff are spread across Europe, meeting only for training camps and races.

"Our next step at Team Sky is to find a proper training base," said Brailsford.

"I'm a big fan of centralised [training] models. It's the contact time that is invaluable, and those informal decisions in cafes that become great ideas.

"What you want to create is an environment where there is a quest for continuous improvement: a culture of excellence where everyone knows that in 12 months' time 'I've got to be better than I am now'. That's easier to create under one roof."

The centralised model has worked well for British Olympic and Paralympic track cycling, while there are hopes that the benefits of training together in Manchester will soon be reaped by the BMX squad.

Road cycling, however, is clearly a different proposition, and Brailsford acknowledges the "architecture" of his new base will have to reflect that.

There will be less need for actual bricks and mortar than in Manchester, and the template will be similar to the academy British Cycling once ran from Quarrata in Tuscany. That was a fairly Spartan affair - Bradley Wiggins and co will expect a little more comfort - but the base does not have to be a grand complex.

What Team Sky really need, the 48-year-old coach believes, is access to a variety of terrain, good roads, nice weather and a well-connected airport.

Team Sky, along with many other professional teams, currently use the Spanish islands of Mallorca and Tenerife for training camps, but Brailsford wants something more central and tangible.

A possible option would be to base the team around a well-situated city like Girona, in Spain, where many overseas cyclists spend their seasons there already.

The French city of Nice is perhaps a more likely choice for a Team Sky base, as it is close to Monaco, already home to the team's probable next Tour de France leader Chris Froome and many other top cyclists.