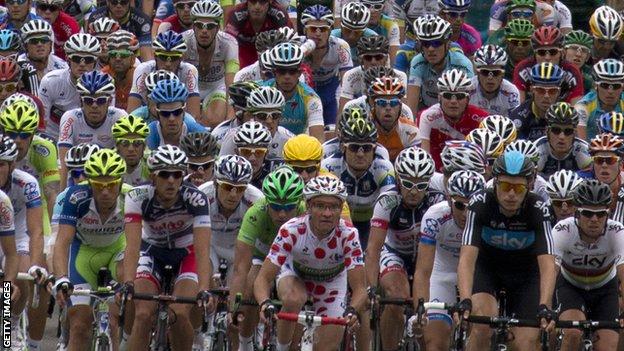 A new cycling World Series featuring 10 grand prix races could be in place as soon as 2014.

Cycling's governing body, the UCI, has confirmed it is in talks with Omega Pharma-QuickStep owner Zdenek Bakala, who would finance the project.

"Confirmation of the UCI's involvement in talks with World Series Cycling certainly makes the project more plausible. But it also poses more questions. The fact the governing body and some teams want to discuss ways of earning more money is as unsurprising as the revelation that some cyclists have cheated. The sport already has F1-style championships: will the new ones be better? It also already has lots of different races, including a very famous and successful French one that doesn't seem interested in brave new worlds."

World Series Cycling claims eight teams are contracted to the series, which would run alongside the three Grand Tours - of Italy, France and Spain.

Team Sky are yet to agree to take part in the series of four-day events.

The series is not certain to get off the ground with the UCI holding the key to further developments, but London-based sports promoters Gifted Group, who are backing the project, remain confident it will take place.

Chairman, Jonathan Price, said: "We want to see races up and running in 2014.

"We've already had discussions with broadcasters, we're confident there's a real appetite for this product.

"We're now going to start some serious discussions with potential host locations to get our first race up and running."

If the series is launched it will feature Mark Cavendish's Omega Pharma-QuickStep team, but Team Sky's Bradley Wiggins is not a certain rider.

Teams contracted to race in the WSC

Riders would race a maximum of 88 days per season, while there is a commitment for an anti-doping programme in a bid to eradicate the use of performance-enhancing drugs.

The UCI said it is discussing the possibility of a joint-venture with WSC.

But it added: "The possible development of the professional road cycling calendar will be subject to comments from the wide-ranging consultation, 'a bright future for cycling' that will involve all the stakeholders in the sport and which will take place in the first quarter of 2013.

"This consultation will have a considerable bearing on this proposed joint-venture and the future road cycling calendar."